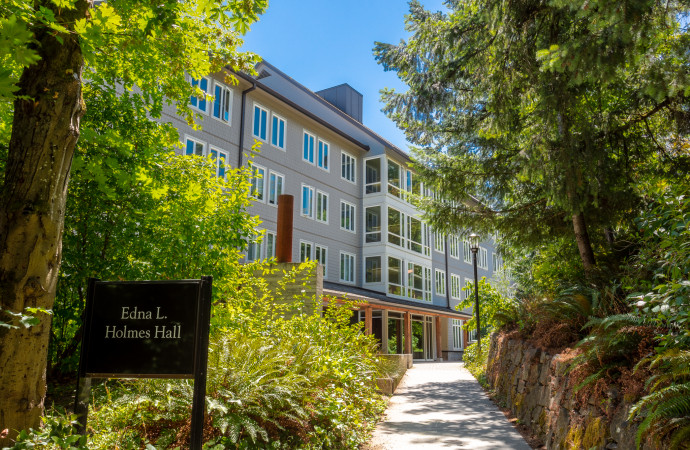 Edna L. Holmes Residence Hall is our newest residence hall, having just opened in the fall of 2012.

Holmes houses 169 beds for sophomore, junior, and senior students and since opening, we’ve had the pleasure of housing some law and graduate students as well. Rooms in Holmes Hall are larger than the average size on campus, and a high percentage of them are single occupancy (77 single rooms). Even with the extra space, though, residents don’t want to spend too much time in their rooms. Holmes Hall features amenities designed to build community: a generous living room, game room, hall kitchen, outdoor wood-burning fireplace, and gas grill.

In addition to these features, Holmes Hall has attained LEED (Leadership in Energy and Environmental Design) Gold certification. The hall’s many eco-friendly features include the use of reclaimed wood (fir and maple) in its building materials, window switches in student rooms that reduce heat when windows are open, monitors displaying real-time energy use, and even a charging station for electric vehicles. Planting swales around the exterior of the building will remove impurities from rainwater before it enters the city’s storm water system.

Holmes Hall is named after Edna L. Holmes, who was instrumental in both creating the estate where Lewis & Clark is located and its sale to the College. She also served as a trustee of Lewis & Clark for nearly half of her life.

TAKE A LOOK AT A TYPICAL ROOM LAYOUT. Keep in mind, this is just a sample room. Rooms in Holmes are all similar in size and layout to the one shown above.