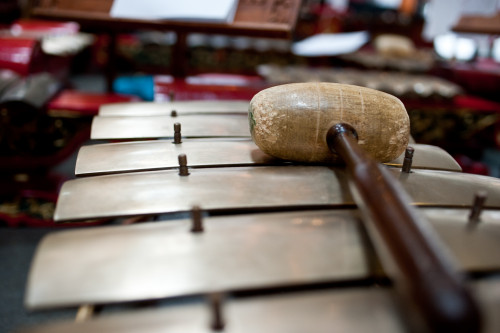 A Few Words About the Gamelan

A gamelan is an orchestra made up of a set of instruments from Java and Bali, Indonesia.

In learning gamelan music, unlike western orchestral music, a musician will learn more than just one instrument. In order to understand gamelan, it is necessary to know what each instrument provides to the whole. During the performance, you will see us moving around and switching instruments.

The instruments in the gamelan can be separated into four distinct categories, each serving a different function in the music. The first is the balungan. This group plays the main melody, usually playing on the beat in a steady pattern. The next set of instruments is the elaborating instruments. These instruments take the main melody and enhance it with patterns (cengkok) based on the notes played by the balungan. The next group is called the accentuating instruments. Instead of elaborating on the melody, these serve to punctuate the music, playing on certain beats or at the end of a piece or a phrase (listen for the big gong). The last group of instruments are the drums, called the kendhang, ciblon and ketipung, depending on the size. These instruments act as a conductor would in an orchestra, regulating the tempo by controlling beginnings, transitions and endings.

And of course, as in anything, there are always exceptions to these rules. The Venerable Showers of Beauty (VSB) Gamelan (known as Kyai Guntur Sari in Javanese) would not be in Portland without the dedication and vision of Vincent McDermott (Lewis & Clark faculty ethnomusicologist and composer from 1977-1997) and the generous support of Loraine C. Fenwick and Lewis & Clark president at the time, John Howard. In 1978, after months of searching in Java, McDermott and Fenwick, with the help of Pak Rahayu Supanggah, located and purchased this set of instruments, chosen for its historic nature, unusual configuration and rare beauty. The Venerable Showers of Beauty Gamelan originated in a village near Semarang, Central Java, Indonesia in approximately 1880.  It was made for and used by a wealthy Chinese Indonesian family.  Lewis & Clark College is particularly fortunate to have a gamelan of this quality and the community group is extremely proud to be able to learn and perform on these instruments.  This gamelan is an example of one of the larger gamelans of Central Java, consisting of two sets of instruments, one tuned to the slendro scale, the other to pelog.  It also contains a few unusual instruments including the demung renteng and the bonang panembung.  This gamelan was the first of its kind in the Northwest and about the tenth to arrive in the United States.  The gamelan was named by one of Java’s most famous and respected musicians and composers, K.R.T. Wasitodiningrat (usually known as Pak Cokro), who was a mentor for the group in its early years. Later, American composer Lou Harrison returned to his native Portland to work with the group several times, and so began a long legacy of new and traditional works being created and performed by the extensive community of music lovers who have played these instruments and contributed to the rich cultural fabric of life in Portland. From 1986 to 2002, the ensemble was led by the renowned Javanese musician, teacher and shadow puppet master Ki Midiyanto, a former Lewis & Clark faculty member.  Pak Darsono “Vokal” was guest director with the group in 1990/91 and Pak Supardi joined the group in 1991/92.

The community gamelan ensemble is currently directed by Mindy Johnston. Mindy started studying Javanese gamelan in 1993 with Ki Midiyanto at Lewis & Clark College. Mindy was awarded the Dharmasiswa scholarship in 1998-99 and 2004-05 to study traditional Javanese music at Institut Seni Indonesia (ISI), the arts university in Solo, Java. From 2004-2007, she studied and performed gamelan music with some of the most renowned Javanese gamelan musicians alive today. In 2010, she received a Master’s degree in Conflict Resolution at Portland State University, with a focus on music and activism and in addition to teaching gamelan works as a victim advocate.

Beginning gamelan classes are open to both students and to the community. No prior musical experience is required. The group is also available to play for special events. For more