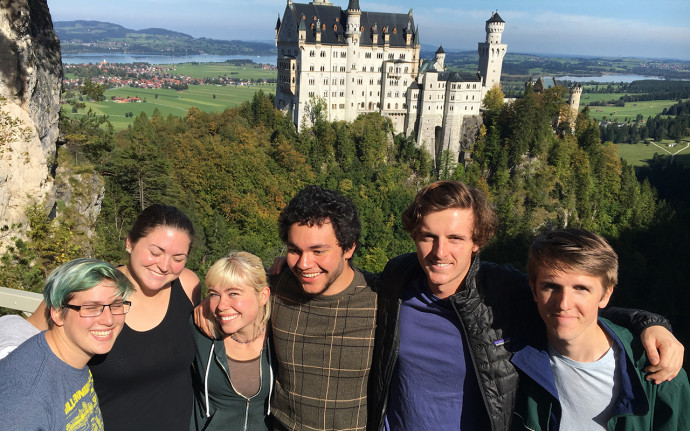 Hallo! Sprechen Sie Deutsch? Worldwide, about 105 million native speakers and 80 million non-native speakers do. In the European Union, German is the most widely spoken language. German writers and thinkers have made great contributions to literature and philosophy. Today, Germany has the largest population of any European Union country and Germany is the world’s third largest economy.  Germany has recently emerged as a leader in the development of cutting-edge environmental technology.

At Lewis & Clark, students who major in German become immersed in the many facets of Germanic culture, in addition to the language itself.  Students may also choose German as a primary or a secondary language in the World Languages Major.

The German Studies major is part of the Department of World Languages. Courses include Beginning, Intermediate, and Advanced German, as well as Literary and Cultural Studies courses. And though our classes and faculty are exceptional, we believe that nothing beats studying abroad; in cooperation with Reed College, we offer a full-year program at the University of Munich.  This program is required for all German majors.

Many students who major in German continue on to graduate school; others seek careers in teaching, bilingual education, translating, interpreting, and other areas in which foreign language skills are important. German Studies is an excellent place to develop new skills, further existing ones, and develop an appreciation for one of the world’s major languages and cultures.