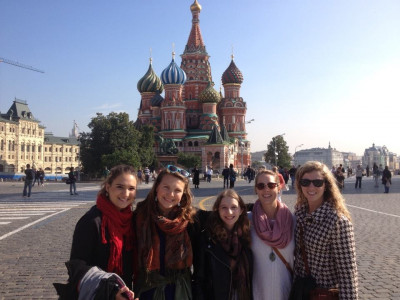 Russian theatre is unlike anything I had imagined.

During my time so far in Moscow, I have attended a show almost every other day. Almost every show has completely altered my perspective on theatre and my approach to its creation. Russian theatre, in short, has no limits; there is no risk that can’t be taken, and the audience is fully supportive of wild choices. The line between metaphor and reality is often blurred, and metaphors are frequently used to depict the emotional state of characters, as well as to illustrate particularly important plot points.

My favorite production so far has been, by far, King Lear at the Satyricon Theater. This show completely changed by perspective of the play and every character in it by exploring the humanity of each of the villains. In particular, Regan and Goneril began the play as normal but ambitious people, who love their sister Cordelia, and love Lear. Over the course of the play, they slowly lost their sanity, and became mad and violent. Regan lost her husband, and carried a body-shaped and sized pillow around with her for the rest of the show; Goneril wanted a child, a nuance communicated only by her habit of wrapping a sheet into the shape of an infant and rocking it, but this desire was never fulfilled for her. Gloucester’s eyes were gouged out through a movement-based sequence with bright, circusy music, which was both energetic and creepy, and without violence Gloucester wrapped a red blindfold around his own eyes and henceforth became blind.
This blending of metaphor and reality, when highly specific and purposeful, is far more effective than simply playing out the text, and has completely changed my perspective on how to create theatre.
My perspective does, however, continue to shift every day. At MXAT (the Russian acronym for the Moscow Art Theatre School), we study six days a week. We have acting every day for two and a half hours, and each day we present an etude (a brief performance with a story, in which an event occurs that somehow changes everyone in the scene). Over the past five weeks, and even from day to day, our etudes have evolved and progressed so far. The first etude my group presented was a bee in a library, and now we are creating metaphorical pieces that blur the lines of reality to explore and dig in to moments in Chekhov’s The Cherry Orchard.
Etudes are the main method of creating theatre in Russia. Every actor who is trained at MXAT creates an etude every day, and etudes are a way in which directors develop the story and their concept in rehearsal. Directors will assign actors etudes, which they will bring the next day, and through this method of exploration, a show is born.
In between rehearsals and classes, we have gone on excursions around Moscow and spent a weekend in St. Petersburg. Both cities are compelling in their own ways; St. Petersburg, for instance, is full of history, especially from the Imperial era. Moscow, on the other hand, is a little less touristy and much more the business and art-focused center of Russia.
As far as cultural interactions go, Russians tend to seem cold and closed off until you get to know them. They find Americans to be generally loud and not honest about how they’re feeling. If you ask a Russian how they are, you should be prepared for a long answer detailing what is happening in their lives. Especially in the current climate, general sentiment towards Americans isn’t at its height, but MXAT is a different world from the rest of Moscow. I have felt very welcomed into this wonderful institution and city, and have had almost exclusively positive experiences. Yesterday, I was even asked for directions to the nearest metro station, and was able to answer in Russian, which made me feel greatly accomplished compared to the panicked blurting of, “I only understand some Russian, I’m sorry!” which I’ve mostly relied on until now.
In the meantime, I continue to navigate cultural differences, improve my very-broken Russian, and spend the day creating. Life in Russia ain’t half bad.
(First photo: Red Square)
(Second photo: The Hermitage Museum in St. Petersburg.)