As part of the Studio Seminar on Contemporary Art Theory and Practice at Lewis & Clark College, the Department of Art Visiting Artist Lecture Series brings practicing artists to campus to discuss their work. All lectures are free and open to the public. Lectures will be held at 7pm in Miller 102 (campus parking is free after 7pm). 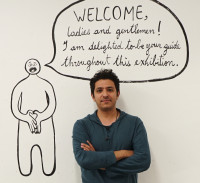 Bassem Yousri (born in Algeria; lives and works in Cairo, Egypt) is a visual artist, filmmaker, and art educator. He works with a variety of forms, including mixed-media installations in art galleries and public spaces, and experimental and documentary films. Investigating the relationship between form and representation in the context of the exhibition space and public space, Yousri relies on humor and sarcasm as a tool to reach audiences across diverse cultures, attempting to critique common stereotypes and taboos. While his work is often rooted in a commentary on the contemporary Egyptian socio-political situation, he considers possible parallels and connections to different geographical and cultural contexts. Yousri’s work has been widely exhibited nationally and internationally, including the Museum of the Moving Image (MoMI) in New York, USA; Centre Pompidou in Paris, France; Sharjah Art Foundation, UAE; Mathaf: the Arab Museum of Modern Art in Doha, Qatar; l’Institut du Monde Arabe in Paris, France; the State Museum of Egyptian Art in Munich, Germany; and IVAM (Institut Valencià d’Art Modern) in Valencia; Spain. Yousri received his MFA from Tyler School of Art and his BFA from the School of Fine Arts – Helwan University in Cairo. 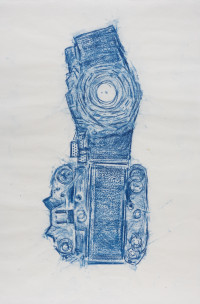 Jennifer Bornstein works in diverse media, including photography, printmaking, video, 16-millimeter film, and etching. She has received numerous awards and grants, including the Foster Prize from the Institute of Contemporary Art, Boston, a Radcliffe Fellowship at Harvard University, a DAAD Berliner Künstlerprogramm fellowship, and a Pollock-Krasner Foundation grant. Her work has been widely exhibited in the United States and internationally, including solo shows at the Museum of Contemporary Art, Los Angeles, Fargfabriken Center for Contemporary Art, Stockholm, the Stedelijk Museum, Amsterdam, and most recently the St. Louis Art Museum, St. Louis. Group exhibitions include the Hammer Museum, Los Angeles, Menil Collection, Houston, Serpentine Gallery, London, Centre Pompidou, Paris, and the 2014 Whitney Biennial at the Whitney Museum of American Art, New York, among others. Born in Seattle, now based in Los Angeles, CA, Bornstein is currently associate professor of photography at the University of California, Irvine. 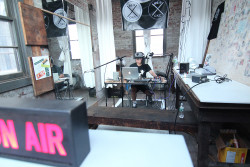 Eric Ramos Guerrero considers the detritus of the West as a place where cultural unrest endures and returns to the viewer as glimpses; things half seen between the foliage of an obstructed beach view or as a weak radio signal emerging through the static. Through painting, drawing, prints sculpture, video and performances, Ramos Guerrero mines both the fluidity of multiculturalism, and our romanticism of the exotic to propose alternate histories and possible futures. Exhibitions have included The Drawing Center, El Museo Del Barrio, The Fisher Landau Center for Art, the Philippine Center in New York, and internationally at the Inside-Out Museum, Beijing, China, Pongnoi Art Space, Chaing Mai, Thailand, the Museum of Contemporary Art Vojvodina, and Mathilde Hatzenberger Gallery in Brussels, Belgium. Ramos Guerroro received a BA from San Diego State University, a BFA from the School of the Art Institute of Chicago, and an MFA from Columbia University. Born in the Philippines, now based in NY, he is currently a visiting professor at the University of Oregon.

Brittany Ransom makes art to probe the lines between human, animal, and environmental relations while exploring emergent technologies. Using ready made and custom computing interfaces, code, and utilizing sensory data as a material, her work introduces concepts that explore the conflicted relationship between our human culture, the way we interact with one another via digital interface, and the concern for nature. Ransom’s most recent work has been exhibited in Los Angeles, Chicago, Berlin (as part of Transmediale 2017), and Dallas. Ransom received her MFA in Electronic Visualization from the University of Illinois at Chicago and her BFA from The Ohio State University with a concentration in Art and Technology. Ransom is queer, half black, and was born and raised in the small city of Lima, Ohio. She currently lives in Long Beach, CA, where she is the Associate Director of the School of Art and Associate Professor of Sculpture + New Genres at California State University Long Beach.

Sherrill Roland (born in Asheville, NC), received a BFA in design and MFA in studio art from the University of North Carolina–Greensboro. As he describes his work, Roland “creates art that challenges ideas around controversial social and political constructs, and generates a safe space to process, question, and share.” He is the founder of the acclaimed Jumpsuit Project, intended to raise awareness around issues related to mass incarceration. The work grew out of the ten months he spent in state prison, wrongfully convicted just as he had started his last year of grad school. Based on new evidence, Roland was eventually exonerated of all charges. The project is meant to provoke conversation around issues related to incarceration, including prejudice toward those incarcerated. Roland has presented work at LACE: Los Angeles, the Studio Museum of Harlem, and ARTSpace Raleigh. Most recently he’s been an artist in residence at the McColl Center of Art + Innovation in Charlotte, NC and a Rights of Return USA Fellow.

Lyndon Barrois Jr. (born in New Orleans, LA) uses magazines, advertising, cinema, and vernacular imagery in his work, translating processes of production and meaning between various material contexts. His practice is informed by constructed realities, material economy, and nuanced representations of marginal identities and histories that surround race and representation. He received his MFA from Washington University in St. Louis as a Chancellor’s Graduate Fellow, and his BFA in Painting from Maryland Institute College of Art in Baltimore. His work has been exhibited throughout the US and Europe, and he has recently completed residencies at the Bemis Center for Contemporary Art, Van Eyck Academie in Maastricht, Fogo Island Arts, and the Irish Museum of Modern Art in Dublin, Ireland. 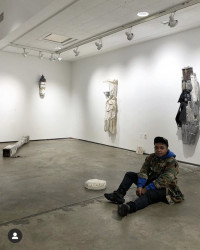 Thomas is a current MFA student at Yale University, graduating this spring. Thomas is originally from Chicago, IL, and received their BFA from The School of The Art Institute. With their practice and through various mediums, Thomas has been investigating ways of portraying aspects of the human condition. A current focal point has been using soft and hard materials (often fabric, stitching, book or parts of architecture) to create more of a hybrid being or particular metaphysical encounter. A recurring theme in Thomas’ work has been the body as subject. The artist is in constant contemplation of “what does it mean to have a vulnerable body or an impossible body in our societies?” The figures Thomas often presents act as informed representations of a particular disposition that is in relationship to others that encounter them. Thomas is known for their practice in fiber mediums and embroidery, but has currently been incorporating sculptural elements, found materials, and plaster casting to develop imagery and form.