After graduating, he worked as a mountain-climbing guide and a ski-patrol member, while participating in an avalanche-training program in 1997, Kent died tragically in a helicopter crash.

Kent’s parents established the Kent Swanson Jr. Memorial Scholarship for Ceramics in honor of their son. It is awarded to individuals with interests and enthusiasm similar to Kent’s. 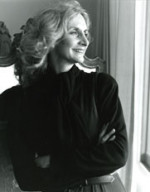 Barbara Scheidler Bartholomew was a much-loved instructor of art at Lewis & Clark College. Barbara taught painting, drawing and several other art classes from 1994 -2007

Barbara believed in the power of art and beauty to change lives for the better.  She was deeply connected to Asia and its philosophies and traveled as an invited guest professor in Japan and China. Many students and friends remember her as the person who “taught them to see” She was an accomplished painter, with exhibitions in Oregon, New York, Japan and China among others.