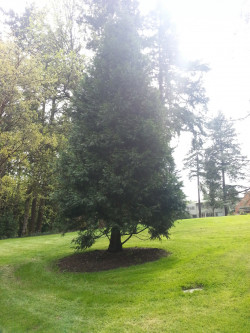 It consists of 20 species, including native trees that Meriwether Lewis and William Clark encountered on their journey west.

In 1990, students Eric Wold ’90 and David Craig ’90 conducted a comprehensive census of campus trees and wrote A Natural History Guide to the Lewis & Clark College Campus. The guide included a tree walk that featured 48 species.

In 2002, Evan T. Williams, professor of chemistry and founder and chair of the Environmental Studies Program, inspired students to restore the tree walk, which had fallen into some disrepair, and enhance its educational and aesthetic value. He and student Clara Elias ’04 incorporated elements of the Lewis and Clark Expedition and tree identifications with a path they hoped would “meander in congruence with the new campus plan and link the residential and academic halves of the campus.” With the passing of Williams in spring 2004, the graduating class, led by Elias, dedicated their senior gift to a revived tree walk in his memory.

The Class of 2005, led by Anna Henry ’05, Ashley McElheny ’05, and Chris Ragsdale ’05, developed educational materials to accompany the restoration of the tree walk.

The Professor Evan T. Williams Tree Walk Study Guide was written by Clara Elias ’04, Ashley McElheny ’05, Anna Henry ’05, and Chris Ragsdale ’05 and initially released in published form at the dedication of the Tree Walk on May 7, 2005. It includes a brief history of the tree walk; acknowledgements of faculty, staff, and students who worked diligently to bring this commemorative walk to fruition; a brief biography of Professor Evan Thomas Williams; a map: and a guide to the 20 featured trees, including tree descriptions. 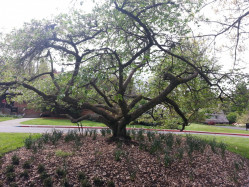 A Tree Walk map is also available in Frank Manor and at the two interpretative signs along the Tree Walk.

Make a gift to the Tree Walk

The Evan T. Williams Memorial Tree Walk Collage was created in 2014 to commemorate the 10th Anniversary of the initiation of the Tree Walk by the Class of 2004.