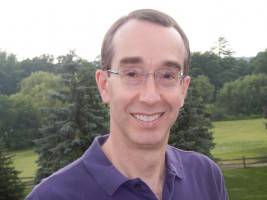 Christopher Wood was born in Sioux Falls, South Dakota and grew up in California, Winnipeg and Vancouver, Canada, and Minnesota before graduating high school in nearby Lake Oswego. “I chose to attend Lewis & Clark College in 1978, because of its liberal arts focus, a visit to the college, advice from family and friends, the natural beauty of the campus and its proximity to home.” He graduated with a Bachelor Arts in Chemistry degree in 1982 and was fortunate in his 2nd year to be part of the initial group of students who transitioned to the new Olin physics and chemistry building in 1979. The fall of that same year, Chris was part of the first overseas study group to visit Russia and the U.S.S.R. Besides enjoying a diverse curriculum during his college years, he was able run track and cross country under Eldon Fix and during his senior year, Eldon’s son, David Fix.

After college, he attended and graduated with an M.D. from Johns Hopkins Medical School in 1986 and completed a medical internship at Good Samaritan Hospital in Portland, Oregon in 1987. He was a radiology resident at the Johns Hopkins Hospital from 1987 to 1991. During this time he also studied radiology at the Armed Forces Institute of Pathology in Washington, D.C. and at the Oxford University Hospital system in Oxford, England. In 1992 Chris finished his training as a neuroradiology fellow at the Mayo Clinic in Rochester, Minnesota and was privileged to join their staff, where he presently works. He was fortunate to meet his wife, Dana at work in 1995 and they have been happily married since 1997. They have 4 active children, a daughter, Lauren who is 17, and 3 boys Jack, Alec, and Matthew ages 16, 14 and 12 respectively.

“Besides patient care, clinical research and enterprise administrative activities, I enjoy teaching and learning from medical students, residents and fellows.” Mayo has allowed him to observe and participate in many of the changes in medicine over the years, especially the implementation of the electronic medical record and the rapid advancements in radiology. During his career, Chris has been active in several national radiology organizations. Presently, he spends time working on the American Board of Radiology and the American Society of Neuroradiology.

He still enjoys running but also stays fit by swimming, lifting weights and cross training. Chris’ overseas study trip stimulated an interest in travel, which he has pursued over the years by visiting Alaska, Canada, Mexico, the Caribbean and Europe on multiple occasions. “I have fond memories of my time spent at Lewis and Clark, especially the many people with whom I interacted, the free exchange of ideas, learning how to write and communicate effectively, and developing the skills necessary for critical thinking and analysis. So much of this has been instrumental to my personal happiness and professional success over the years.”