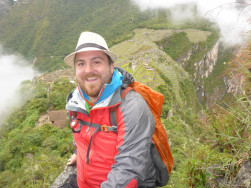 Chris Scheffler grew up in Eureka, California in coastal Humboldt County. He came to Lewis & Clark in the fall of 2006, seeking an intimate education that was well rounded in subject matter, social activities, and athletics. During his time at LC, Chris was involved with Cross Country and Track on campus and spent many days snowboarding on Mt. Hood. He was also drawn to LC because of its study abroad programs and was a member of the first program to Greece and Turkey in 2007. He was involved with both the physics and mathematics departments, working as a summer researcher, teacher’s assistant, and tutor. He also served as the Physics Club President, where he helped to revive the group.

In the end, Chris completed a double major of Physics and Computer Science & Mathematics. After a six month internship at FEI Company in nearby Hillsboro, he was recruited to work for Intel Corporation at their main headquarters in Santa Clara, California; where he was employed for nearly 6 years. Chris spent this time in industry working in research and development, primarily around the area of charged particle beam systems and has been an invited speaker and author / co-author for various conferences and entities. Chris returned to academia in the fall of 2016 by beginning the MS / PhD program in Applied Physics at Portland State University. After working as a Teacher’s Assistant for his first year, he received the SMART Scholarship from the Department of Defense and is now a full-time student / researcher.

In his free time, Chris is very active with traveling, enjoying the outdoors, and a great group of friends and family. After arriving at LC having only visited two states and no other countries, he has now visited over twenty states and a dozen countries across the globe.

Chris was elected to the Board of Alumni in June of 2015 and has enjoyed giving back to the college in new ways. He is most interested in improving the connection between the college’s strong scientific departments and industry, as well as increasing young alumni involvement with the college.