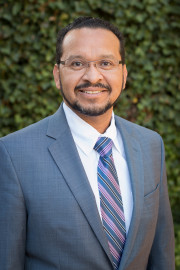 Edgard Antonio García-Ramirez (a.k.a., Edgard Garcia) is a native of Nicaragua. He studied English and Spanish at the American Nicaraguan School in Managua. In the mid 80’s, Edgard embarked on a perpetual “study abroad” trip. Nicaragua was in turmoil at the time and he had to depart to avoid possible harm. His destination was the US through Mexico to seek political asylum. Edgard entered the US in 1985 and moved to the Bay Area. He attended high school in San Francisco graduating as one of the top students. At 17, Edgard was emancipated and worked hard to complete his high school career.

Edgard had planned to move to Berkeley to attend Cal but Greg Caldwell, member of the international students’ office, called and announced that Edgard could move to Portland to be a Pioneer.

Edgard had found a home at Lewis & Clark. Between 1988 and 1996, Edgard supported himself by working at Bon Appetit Management Co. (The Bone), absorbing an amazing liberal arts education, learning how to learn, participated in as many activities as time allowed: intramurals, student government, he was an RA, a student security officer, volleyball team manager, etc. Between 1992 and 1996, he joined the athletic department and served as Assistant Volleyball Coach, Assistant Basketball Coach, Assistant Softball Coach, Pamplin Coordinator, Intramural Assistant, working with Coach Fix and the track & field teams, and much more.

In 1996, Edgard earned his Bachelor of Arts in Hispanic Studies. However, he’s still considered to be Class of 1992 member. After graduation, Edgard served in the Navy, travelled around the country and returned home to Portland. For the last 20 years, Edgard has worked in the language services industry. He owns EAG Language Services, LLC and is presently the Corporate Translator and trainer for SAIF Corporation. Since 2003, he has been teaching agricultural safety to 550+ Spanish preferred workers in Oregon each year. Edgard lives with his son, Evan Antonio, a future Pioneer. Edgard’s hobbies are working out, running, healthy eating, traveling all over Oregon and being a parent. He is also a member of the Hispanic Metropolitan Chamber of Commerce Leadership Program – Class X.