Art Exhibit: The Space We Create

Student and community artists challenged traditional views of multiculturalism, moving us beyond simplistic notions of race.

Keynote Performance: Sentimental Journey: A Concert of Poetry with Jazz

Welcome by Julio de Paula, Dean of the College 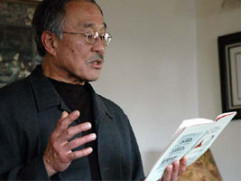 Inada will be available to sign books during the program intermission.

This event is co-sponsored by the Department of English.

Keynote Event: Race Monologues: Here I Stand Before You

In poetry, spoken word, and song, Lewis & Clark College students powerfully express their diverse experiences with race and identity. Their stories encompass anger, sadness, and everything in between, provoking raw emotions and new conversations about our uncommon journeys and common dreams.

Keynote Lecture: “Race versus Racism” What’s in a Word?”

Barbara J. Fields is one of the most influential scholars examining the history of the American South and the idea of race in the United States. The author of numerous award-winning publications, she has been recognized with many honors, including a John D. and Catherine T. MacArthur Fellowship. In addition to lecturing widely in the US and internationally, she served as a featured commentator in the PBS documentary “The Civil War.”

Join us for a party with salsa band Lo Nuestro, featuring LC’s own Freddy Vilches, Assistant Professor of Spanish

Focusing on diversity and multicultural issues surrounding race and ethnicity, this symposium strives to increase the College’s awareness of cultural history, ethnic identity, and knowledge of social issues impacting minority communities locally and nationally. This symposium was named in honor of the Late Ray Warren.