The Physics and Astronomy Division of the Council on Undergraduate Research (CUR) has chosen Associate Professor Shannon T. O’Leary as the 2017 recipient of their Mentor Award. This annual award recognizes a professor for their exemplary work with undergraduate student researchers. At Lewis & Clark, Dr. O’Leary studied the interaction between laser light and rubidium atoms, an interaction that is highly sensitive to small variations in the surrounding magnetic field. In her more than five years at the College, she mentored 17 undergraduate students in research.

In April of 2017, physics alumnus Ben Whitenack ’16 traveled to Washington DC to present the results of his work in the O’Leary lab to Congressional staff at the CUR Posters on the Hill event. Ben is pictured below with US Senator Jeff Merkley (D-OR). The research project is continuing through 2017 with the support of a National Science Foundation grant awarded to Dr. O’Leary. 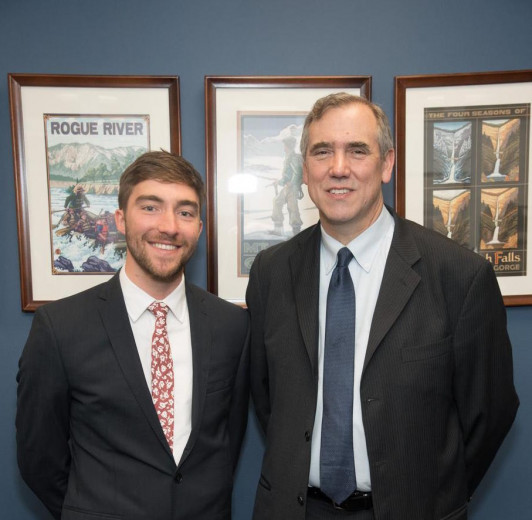