Feel the wind in your hair on a Two-Masted Gaff Topsail Schooner, while Professor Emeriti of History, Stephen Dow Beckham, describes the history of the San Juan Islands. Join Stephen Dow Beckham, his wife Patti, and other Lewis & Clark alumni and friends on the trip of a lifetime, exploring the magnificent waters of the San Juan Islands aboard the historic Schooner Zodiac!

Guests are encouraged to join the crew, helping to hoist the 7000 feet of sails, or just relax in the Zodiac’s 1920s style elegance, furnished with modern comforts. Try out the Zodiac’s kayaks or grab the binoculars to see a passing orca. Share stories from your time at Lewis & Clark or compare notes from the day’s adventures while enjoying a delicious meal as the sun sets over the Olympic Mountains.

The Schooner Zodiac, a 160 foot long, Two-Masted Gaff Topsail Schooner, originally launched in 1924.  While aboard, passengers stay in spacious berths or private staterooms. There are three restrooms aboard and two hot showers as well. The Zodiac is heated and well ventilated.

Standard berths are 48 inch bunks, adjacent to the ship’s salon and feature a heavy curtain.

The ship’s staterooms are located both forward and aft and contain multiple bunks, a sink, a mirror and a door for privacy.

One must be able to negotiate stairs and narrow walkways in order to navigate the living areas on the Schooner Zodiac. See the virtual tour here.

August 11th: About 11 am, board the Schooner Zodiac in Bellingham, and begin the journey.

August 12th: Sail the San Juan Islands through the Rosario Strait with possible ports of call, Echo Bay on Sucia Island and Roche Harbor on San Juan. (Bonus! The Perseid Meteor Shower, considered one of the most intense annual meteor showers, is happening during this time. The Perseids regularly produce up to 60 shooting stars an hour at their peak. 2018 promises to be particularly good since the peak will coincide with a dark, moonless sky on the night of August 12 and into the predawn hours of August 13. The thin crescent moon will set during the early evening, creating excellent viewing conditions across the Northern Hemisphere.)

August 14th: Watch for orcas and Steller sea lion as we sail to Spencer Spit on Lopez Island.

August 15th: Set sail back to Bellingham for an afternoon return to our dock in the Fairhaven District.

To be put on the waiting list, or for questions, please email Ginger Moshofsky ’83 at ginger@lclark.edu. 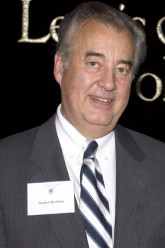 Stephen Dow Beckham is the Pamplin Professor of History, Emeritus, having taught at Lewis & Clark from 1977 to 2012. Over the years, he taught at the undergraduate college, the graduate school’s teacher education program, and the law school’s Indian law program.

He is known for his work with Native Americans and the American West, especially the Pacific Northwest and the Lewis and Clark Expedition. Beckham is a leading authority on Indian law and has been called as an expert witness in many cases nationally involving Indian treaty rights, casinos, reservation resources and boundaries.

Beckham has been honored as the Oregon Professor of the Year, and has been the recipient of the American Historical Association’s Asher Distinguished Teaching Award, and the Earle A. Chiles Award for “contributions to the understanding of the high desert interior of the American West.”

Beckham has authored over a dozen books including:
Requiem for a People: The Rogue Indians and the Frontiersmen (1971)
Tall Tales from Rogue River: The Yarns of Hathaway Jones (1974)
Indians of Western Oregon: This Land Was Theirs (1977)
Lewis & Clark College (1991)
Many Faces: An Anthology of Oregon Autobiography (1993)
Lewis and Clark in Oregon Country: From the Rockies to the Pacific (2002)
Literature of the Lewis and Clark Expedition (2003)
Oregon Indians: Voices from Two Centuries (2006)