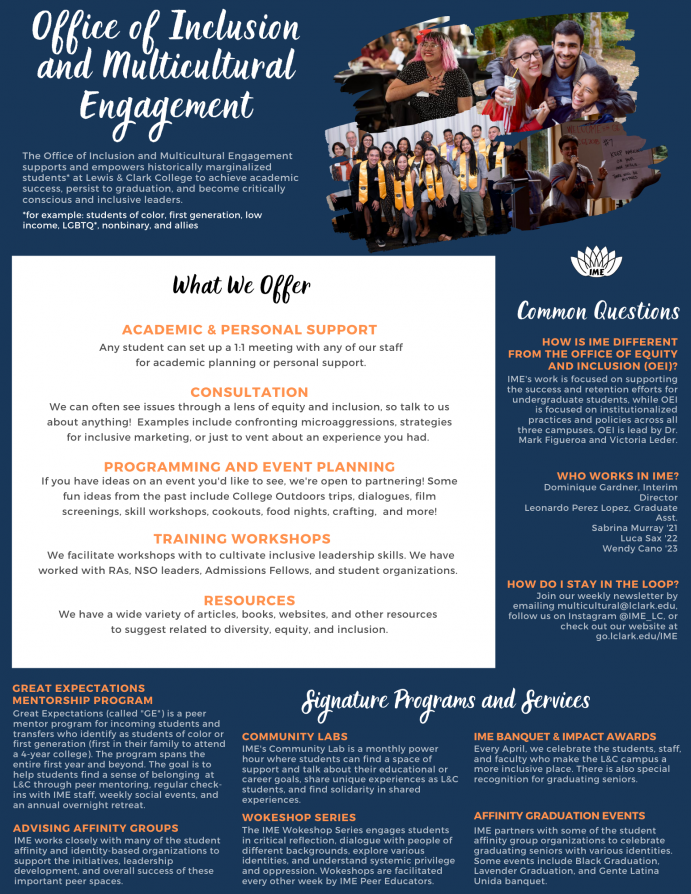 The Office of Inclusion and Multicultural Engagement was founded in 1992 by Ray Warren, and was originally known as Ethnic Student Services. Over the last 27 years, the office has changed names and has grown into what it is today, but it could not have happened without the leadership and legacy of Ray Warren.

Ray Warren began his work at Lewis & Clark in 1987 as an associate dean of admissions and was named associate dean of students and director of ethnic student services in 1992. He was instrumental in admissions recruiting and in supporting students of color at Lewis & Clark. He took the lead on organizing the annual Martin Luther King, Jr. day celebrations held on campus, and his leadership was an essential part of the Diversity Cluster and the LINCS programs (now known as Great Expectations). Ray was a strong supporter of the athletic program and our student athletes here as well.

Ray’s warm smile and friendly greetings put everyone at ease, and his wonderful laugh echoed through the halls of Templeton Student Center. A tireless advocate for diversity, he was sought out by students of all backgrounds, in large part because of his keen ability to listen carefully and his wise advice. Ray cared deeply for all students at the College, and he cared deeply about the mission and values of the College itself as he worked with his colleagues to effect the change—however incremental—needed to make the College the most welcoming, diverse community possible.

He was elected to the Lewis & Clark College Sports Hall of Fame in 1989 for his excellence as a baseball player during his college years, and the annual Ray Warren Symposium on Race and Ethnic Studies is named in his honor.