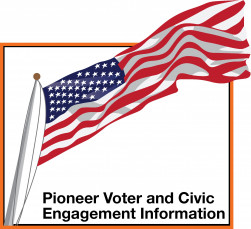 The information below is provided by Student Activities as a resource for Lewis & Clark student voters in:
• registering to vote in their home state (if you are not already registered to vote in Oregon)
• updating voter registration
• understanding voter registration deadlines in their home state, and
• how to get involved in voter advocacy
• providing a list of voter advocacy and education resources

As a part of a long standing tradition of exploring, learning, and working together, Lewis & Clark College values and protects the freedom of students, faculty, and staff to express political views, to exercise their right to vote, and to participate in the electoral process. At the same time, to retain its status as a tax-exempt organization under section 501(c)(3) of the Internal Revenue Code, Lewis & Clark must not participate or intervene in any political campaign, on behalf of or in opposition to any candidate for political office, issue, or initiative.

As a service to the Lewis & Clark community, only ballots for Multnomah County will be collected at the Mail Room in Templeton and delivered to our nearby official ballot drop site by students and staff from Student Activities on Election Day. This convenience saves you a trip and a stamp!

Don’t forget, as a Lewis & Clark student you have the option of voting in Oregon or your home state. If you have any questions about this, please do not hesitate to contact Student Activities. Voter information for all fifty states, the District of Columbia, and US Territories can be found below.

Do you know of any voter advocacy and education resources that you’d like to see listed on this site? Send the site’s name and address to activities@lclark.edu and we’ll add it to the list!

Voter registration, absentee voter, and election information for all fifty states, the District of Columbia, and US Territories.