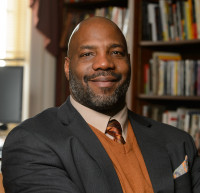 Jelani Cobb is a historian and New Yorker staff writer whose work examines race, politics, and culture in the United States. In 2015, Cobb received the Sidney Hillman Prize for Opinion & Analysis Journalism for his New Yorker columns, in which he combines “the strengths of an on-the-scene reporter, a public intellectual, a teacher, a vivid writer, a subtle moralist, and an accomplished professional historian.” His articles include “The Anger in Ferguson,” “Murders in Charleston,” and “What We Talk About When We Talk About Reparations.”

Cobb is also Ira A. Lipman Professor of Journalism at the Columbia University Graduate School of Journalism, and he is the recipient of the 2017 Walter Bernstein Award from the Writer’s Guild of America for his investigative series Policing the Police, which aired on PBS Frontline in 2016.

Cobb was formerly associate professor of history at the University of Connecticut, where he was director of the Africana Studies Institute. He has received fellowships from the Fulbright and Ford Foundations. He is the author of The Substance of Hope: Barack Obama and the Paradox of Progress; To the Break of Dawn: A Freestyle on the Hip Hop Aesthetic; and The Devil and Dave Chappelle and Other Essays. 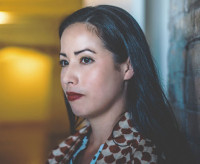 Artist Wendy Red Star works across disciplines to explore the intersections of Native American ideologies and colonialist structures, both historically and in contemporary society. Raised on the Apsáalooke (Crow) reservation in Montana, Red Star’s work is informed by both her cultural heritage and her engagement with many forms of creative expression, including photography, sculpture, video, fiber arts, and performance. An avid researcher of archives and historical narratives, Red Star seeks to incorporate and recast her research, offering new and unexpected perspectives in work that is at once inquisitive, witty, and unsettling. Intergenerational collaborative work is integral to her practice, along with creating a forum for the expression of Native women’s voices in contemporary art.

Red Star has exhibited in the United States and abroad at a wide range of venues, including the Metropolitan Museum of Art, Fondation Cartier pour l’Art Contemporain, and the Minneapolis Institute of Art, among others. In 2016, she participated in Contemporary Native Photographers and the Edward Curtis Legacy at the Portland Art Museum, and she recently mounted a solo exhibition as part of the museum’s APEX series. Red Star has served as visiting lecturer at institutions including Yale University, National Gallery of Victoria in Melbourne, Dartmouth College, and CalArts. 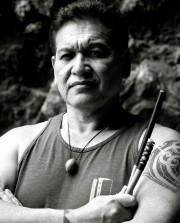 While growing up in the 60ʻs, 70ʻs and 80ʻs Suluʻape Keone Nunes was fortunate to have sat and learned from Kupuna (elders) from his family and the Hawaiian community. Although there were many subjects that were discussed, one that became an important focus was the information shared about Uhi (Hawaiian tattoo). This has been a focus of Keone’s since the late 1980’s. Keone has been doing uhi since 1990 with machines. In 1996 Keone met Suʻa Suluʻape Paulo, originally from Apia, Samoa, but who lived in Auckland, New Zealand. This meeting laid the foundation for Keone to be able to do uhi in the same fashion as was done for over 1,000 years in Polynesia with traditional tools. Keone studied under Suʻa Suluʻape Paulo until his passing in 1999. He has been doing work with traditional Polynesian tools exclusively since 2000. In 2001 Keone was given the honor of receiving a title from the family of Suʻa Suluʻape Paulo. He was the first Hawaiian to receive the Suluʻape title and among the first non-Samoans to receive this prestigious title.

Suluʻape Keone has been a primary force in the re-establishment of uhi in the Hawaiian community. He has shared his thoughts on designs, techniques, and cultural importance of Hawaiian uhi in Europe, Asia, Polynesia and the Continental United States. He has also been given the honor of being named #22 of the 101 Most Influential People in Tattooing in the world by Bob Baxter, former editor for Skin and Ink magazine and currently editor-in-chief for Tattooroadtrip.com. Keone’s work is included in collections of institutions such as the Smithsonian Institute, Honolulu Art Museum, Oakland Museum of California, and the Museum of New Zealand Te Papa Tongarewa.

Along with his passion for uhi, Keone has been a crewmember and protocol officer for the Polynesian Voyaging Society’s voyaging canoe Hokuleʻa, and Hawaiʻiloa.