The Bates Center for Entrepreneurship and Leadership is excited to announce the appointment of attorney Brie Bridegum as its first ever Expert in Residence. Brie is an attorney at Stoel Rives LLP and an active member of the firm’s start-up and emerging companies practice. She will host office hours in the Bates Center twice a month where she will meet individually with students as well as speak on topics such as the legal issues facing startups and the transition from student to professional. 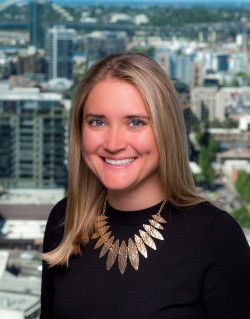 Brie brings a unique, in-house perspective to advising her clients, as she has been seconded and worked extensively on site with two of Portland’s largest software companies, Viewpoint and Puppet, as well as with global semiconductor powerhouse Micron Technologies.

Brie serves on her firm’s Diversity and Inclusion committee. She is committed to its mission of fostering diversity, equity, and inclusion within Stoel and in the communities it serves.

Before joining Stoel Rives, Brie served as a judicial clerk to the Honorable Jack L. Landau at the Oregon Supreme Court.

Prior to her legal career, Brie worked in sports information at the University of Oregon’s Athletics Department, coordinating print and broadcast press coverage of the school’s intercollegiate athletics teams. She also routinely worked for ABC and ESPN at remote broadcasts of sporting events all over the West Coast.