On September 23rd, 2014 the Center for Entrepreneurship at Lewis & Clark hosted Amber Case ’08, Board of Trustees member, and director of R&D at ESRI.  She shared her story, the valuable lessons she learned, and ended the talk with a Q/A with Michael Kaplan, the director of the Center. 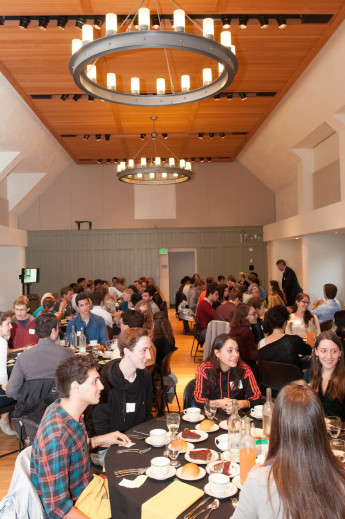 While at Lewis & Clark, Amber co-founded EverCharge (formerly GreenIt), an electric car charging station company.  Shortly after graduation she co-founded Geoloqi, a company that helps developers build smarter and more efficient location based services.  Geoloqi was acquired by Esri, a GIS systems company, who also hired her to direct the R&D branch in Portland.  Amber is also a published author, TED Talk speaker, expert in cyborg anthropology, and was featured in Inc Magazine’s 30 under 30.

The event took place over dinner, as Amber shared her experiences as an entrepreneur.  She emphasized how her education at Lewis & Clark helped her in her work, tipping her hat to a few of her old SOAN professors in the audience.  This major taught her how to understand people, recognize patterns, and apply abstract ideas to everyday life.  In general, she found that having a liberal arts background helped her apply and test theories in all of her projects.

While still in school, Amber and some of her fellow students decided to build an electric car.  The group had the opportunity to present their project at the DOW Jones Emerging Ventures Forum in 2006, but just getting to the conference is a story in itself.  The team needed the school to buy their plane tickets to the conference, and to get this money, they went to the president of the college.  The first time they tried, the secretary told them that the next available appointment was not for another month, which was problematic because the conference was sooner than that.  So they tried again, but this time, made cookies for the secretary.  They got their meeting with the president, got the money they needed, and attended the conference.  The company still exists today and sells smart EV charging solutions.  This story is just one of many Amber told about doing whatever it takes to get what is needed to succeed. 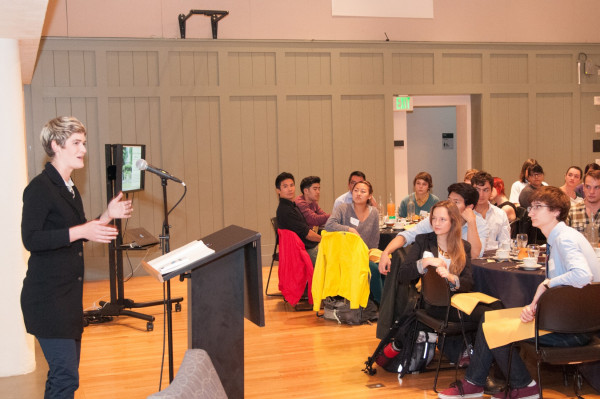 Amber’s excitement, creativity and thoughtfulness shone through as she spoke about her story, from teaching herself how to program, starting companies, going to Lewis & Clark, and to getting Geoloqi acquired.  The evening concluded with an important message: “Entrepreneurship is not about letting your life be chosen for you, its about figuring out what you want in your life and doing what it takes to get there.”

Amber learned some very valuable lessons from her experiences as an entrepreneur, and shared some of them with the audience:

Don’t spend too much money on your project.

Her projects failed all the time, but that was okay because failing never cost too much.  That allowed her to keep failing and as a result, keep learning.

Once people get to a certain level, we assume that they are too busy to talk to us and we don’t bother trying.  But everybody checks their email, so take interest in what they do and try to talk to them about it.

Don’t try to do too much.

The simplest ideas are the best.  Every new thing that you add onto your business or idea adds a layer of complexity.  Figure out what the core of your project is, and go do that.

Watch out for perfection.

Any project that starts out as perfect has a good chance of failing.  Start with something very rough and try to just get a few initial users.  Then with each new revision, make it better, get a few more users, and in the end you’ll learn the complexities, you’ll learn how people are using it, and you’ll learn what’s not working.  In the end, you’ll end up with a great product.

You don’t have to go to grad school to have somebody telling you its ok to break the rules and to tell you its ok to test the theories of people you learn about.  Just go out there and see for yourself. 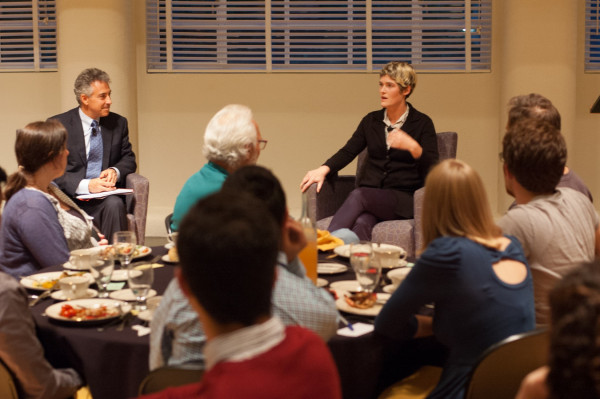