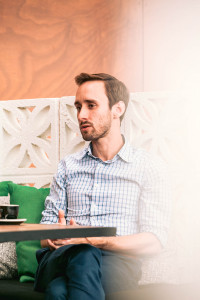 Richard Sames was born and raised on the Texas-Mexico border in Laredo, Texas. He likes to run long distances, read good books, and drink strong coffee. After spending a few years working and attending a community college, he transferred into Lewis & Clark. Maybe it was the sense of community he felt walking through Templeton or the way the professor engaged the students while he sat in on a class, but whatever it was he felt like he belonged on the LC Campus (let’s be real, it was a rare sunny weekend in Portland and as a desert kid he hadn’t ever seen anything like the Pacific Northwest in the sunshine). Richard majored in English literature and was a member of the inaugural study abroad program in Morocco. He volunteered at the on campus Co-Op every semester and worked on the college’s literary magazine his senior year.

After graduation, Richard moved back to Texas to work for his uncle and cousin in the auto industry. It was there that he began to truly appreciate the depth of his time at Lewis & Clark as he was able to put into practice the skills that he developed throughout his college career. Today he is the general manager at an auto lending institution and attributes his ability to address problems, manage others, and communicate effectively to his academic experience.

He is grateful for his experiences both on and off campus, and feels immensely privileged and lucky to have been able to study at Lewis & Clark. He is looking forward to joining the board in an effort to engage past, present, and future students, and to continue to be involved in the LC community. He averaged 0 points and 2.5 rebounds on his middle school basketball team.