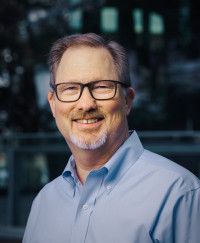 Erik Jensen, BA 1981, originally from Lincoln, Nebraska, came to Lewis & Clark College after spending the majority of his youth growing up overseas (Denmark and Iran) and a few years in Minnesota. During his time at Lewis & Clark, he was involved in student government, went on the college’s first Soviet Union program, and worked on Congressman John Anderson’s 1980 presidential campaign, among many other adventures.

After graduating, Erik spent several years working as staff on other national, state, and local political campaigns. He also worked at the Oregon Legislature as a legislative aide in the early 1980’s before becoming a paralegal for a Portland law firm. Realizing his real passion was public policy, he obtained an MPA from the Evans School of Public Policy & Governance at the University of Washington. Returning to the Portland area, he worked as a public involvement consultant with a public affairs consulting firm and, subsequently, joined the City of Hillsboro as a project manager and, later, Administration Director.

Erik is a strong proponent of higher education and credits Lewis & Clark College with providing a strong foundation for his career. In addition to the Lewis & Clark Alumni Board, he also serves on the Shattuck St. Mary’s School Alumni Association Board, and various public policy professional organization committees.