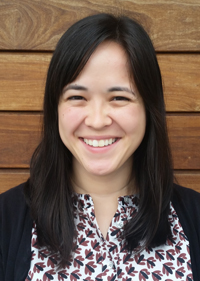 Hanako Imber was raised in Olympia, Washington.  Knowing she wanted to go to a small liberal arts college, she scoured the Oregon-Washington area and found Lewis & Clark. On a prospective student trip, she sat in on a game theory class, and was impressed by the atmosphere and material. This experience was one of many reasons she was passionate to become a student at Lewis & Clark in 2006.

At Lewis & Clark, Hanako participated in a number of student life initiatives and activities, culminating in her service as the student life intern to the Office of Multicultural Affairs.  As the student life intern, Hanako organized and pursued a number of initiatives, including the LINCs mentoring program and improvements to the Exploration & Discovery curriculum. She was a member of Asian Student Union and also studied abroad in Osaka Japan at Kansai Gaidai University during her junior year.

Hanako was also active in the Math & Computer Science Department.  She was a SAAB tutor, as well as a grader and T.A.  She was a member of the Lewis & Clark team for the Mathematical Competition in Modeling, where she met her future husband.  Some of her fondest memories as a student are of the Math department. To her, it stands out as a great example of a group of caring professors who invest in their students and their success. Hanako remembers professors staying late into the night to help students who’d locked themselves into the study room finish assignments or prep for tests. She keeps in touch with many of these professors to this day and always looks forward to seeing them at events on and off campus.

Partially inspired by her very first Lewis & Clark visiting experience, she graduated with a double major in Economics and Mathematics & Computer Science. After a brief internship at an HR software company, Hanako took a position at Huron Consulting Group in their Healthcare practice. She worked there for over six years, before moving on to a healthcare technology start-up called CloudMed Solutions. In her free time, she enjoys reading, coaching, and playing soccer.