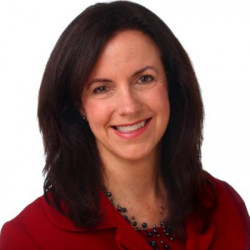 Catherine Gibson was born in Honolulu, Hawaii growing up in Navy family in a variety of port cities, but ended up traveling across the mountains from her home in Sunriver, Oregon to attend Lewis & Clark College.

She earned a Bachelor of Arts in International Affairs in 1985. While at Lewis & Clark, Catherine participated in two overseas study programs: Scotland (focusing on the European Union and International Business) and the USSR (focusing on Russian language and culture). She was active in the Associated Students of Lewis & Clark (including being part of the launch of the Student Academic Affairs Board), and played oboe in the Wind Ensemble.

After earning an MBA in Finance from Vanderbilt University in 1989, Catherine joined AT&T. She spent over 20 years at AT&T working in a variety of business marketing and sales functions, including leading AT&T’s Enterprise Industry Events and Executive Forums teams, as well as their Customer Advisory Councils around the world, taking her to every continent but Antarctica. After leaving AT&T, Catherine has stayed in tech, first at Riverbed Technology doing strategic partner marketing, then as VP of Events for TM Forum, a telecom industry association, and as marketing director at BT Americas. Currently she is VP of Client Engagement at Ignite Advisory Group, a customer advisory board consultancy.

Catherine is also President of the Board of Trustees of Riding with HEART, an equine-riding therapy organization located in Pittstown, New Jersey.

Lewis & Clark is close to her family, with both a brother and sister-in-law being alums. Additionally, Catherine’s son, Ben Green, is a member of Lewis & Clark’s class of 2020, double majoring in Computer Science and Philosophy.