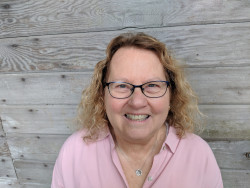 Katie grew up in Santa Fe, New Mexico and chose to attend Lewis and Clark for the college’s elementary education major and the overseas program.  She thought the rain in Portland would be like the high desert rain in Santa Fe which is an event with spectacular thunderstorms, unlike the rain in Portland which lasts…forever!  While at Lewis and Clark she participated in the Turkey overseas program and received a BA in Elementary Education. Upon graduation she taught kindergarten at Boise Eliot, a Portland Public School magnet early childhood education school. Lewis & Clark prepared her well to become a teacher and she appreciated the hands on, practical aspect of the curriculum, and the mentoring she received from her professors during the student teaching portion of her education.

Katie has been a lifelong community volunteer. Her children attended Catlin Gabel School and she volunteered in various leadership roles at the school for 22 years! She is currently a kindergarten classroom volunteer at Kairos a Portland Public charter school whose mission is to shrink the educational gap of under-served children and that elevates the voices of historically under-served children, their families and their communities. When her daughter Anna attended Lewis & Clark she was a member/chair of the Parent’s Council. She is currently a member of the Lewis & Clark Philanthropy Council.

Katie and her husband Mike are owners of Aurora Mills Architectural Salvage, a store that sells everything you would need to build a home out of salvaged antique house parts. Katie is also the executive director of a charitable foundation.

Lewis & Clark has provided an exceptional education to Katie ’79 and her husband Mike ’79, daughter Anna ’15 and son Anders ’20 who will graduate from the Law School in 2020. She has four children, her three sons graduated from Colorado College and all her children live in Portland.

Katie enjoys traveling to places far off the beaten path, Antarctica- Patagonia-Galapagos Islands, she is looking forward to visiting Easter Island as her next adventure. She also enjoys riding her horse, reading and sewing.

Katie and her family are grateful for the education they received at Lewis & Clark, their overseas experiences, their lifelong friends and their ability to use their education to pursue their passions.