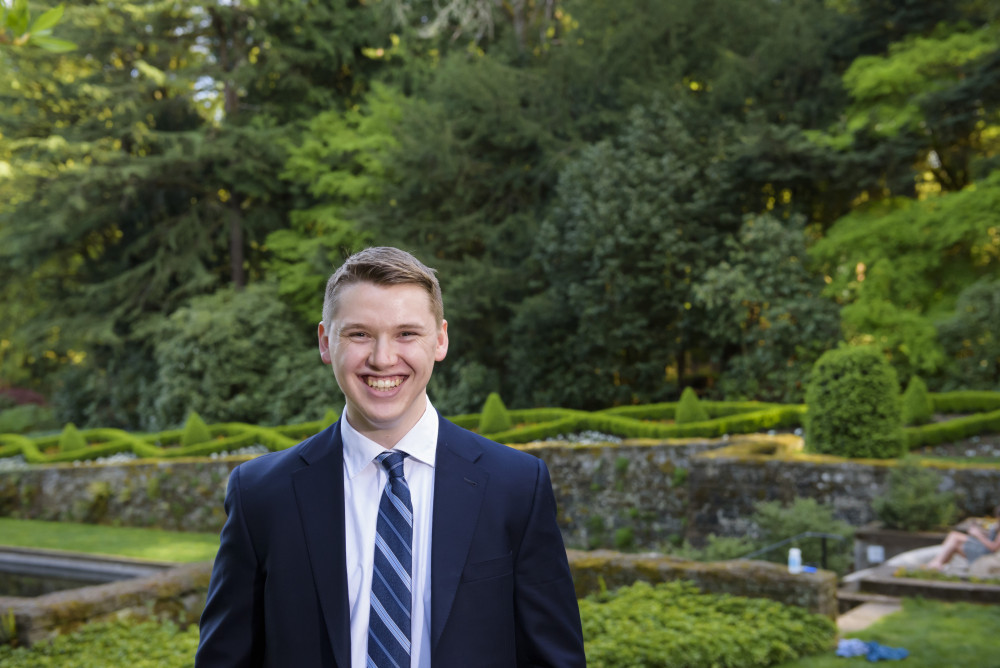 I actually went to another school in London for a year and a half before transferring, but Lewis & Clark had been on my radar since my senior year in high school. I really enjoyed being in London, but the distance from my family was definitely a hassle with having to pick up your life and travel halfway across the world every semester. Also, the school I went to didn’t have the traditional college feel that I wanted and was not academically rigorous enough, so I decided to transfer.

I was able to visit Lewis & Clark, and really liked the location and size of the college. It is big enough to have teams, clubs, and organizations that give you a real college experience, but small enough that you can know everyone in your classes and your professors. The location is also ideal—being within Portland but not in the center of the city means everything is close by and easy to get to, but also far enough to give the campus a distinct feeling from the rest of the city.

“Without a doubt in my mind, transferring to Lewis & Clark was one of the best decisions I have ever made.”

Do you consider yourself a Third Culture Kid (TCK)?

I do consider myself a TCK as I was born in Hong Kong, and have British and Canadian parents. While I did not do much with the TCK program, I was able to meet and become friends with many students with a foreign background, which was a great experience.

Tell us about your dog!

I have a beautiful German shepherd rescue, Sierra, that is seven years old. I was able to have her with me while attending L&C, since I was living off campus. Even though I’ve graduated, I still like to bring her to campus and play fetch with her and let her meet other people. Lewis & Clark is a super friendly campus for animal lovers! Often you will see professors or staff with their dogs on campus.

I work for Fisher Investments in Vancouver, Washington. I am part of the content team, which means that I write reports on political, economic, and market events and what Fisher believes it means for the stock market going forward. I also create informational pieces and brochures that go out to our clients/prospective clients, and help the client-facing roles answer incoming questions. In essence, my team is the voice of Fisher Investments.

I enjoy the freedom that comes with my role because much of what I do is project based and assigned on an as-needed basis, so I am in charge of my own schedule and managing my deadlines. I also have a fantastic team and manager that make working at Fisher much more fun.

How did Lewis & Clark prepare you for your job?

Lewis & Clark prepared me for my position by improving my writing skills, my work ethic, my organizational skills, and my ability to analyze large amounts of information critically. As Lewis & Clark is a liberal arts college, writing is a requirement for all majors. What’s more, you have to be able to write about any subject, including ones that might not be your strong suit. This is an incredibly useful skill and one that has been extremely helpful in my current position. Lewis & Clark is also an academically rigorous school and expects its students to put in hard work. The ability to buckle down and work until the job is done is often an overlooked skill, but one that I have found extremely helpful for my position.

As I mentioned in the previous question, much of my work is project based with rolling deadlines, meaning that I have to maintain a high level of organization to make sure things are done on time. This is a skill that I sorely lacked in high school, but being at Lewis & Clark and having to make sure assignments were turned in on time forced me to improve. Also being around other students and getting to learn from their experiences and knowledge was a great way to pick up new skills and tactics.

Finally, Lewis & Clark helped me learn how to navigate vast amounts of information to find what is most important and use that information to make a coherent and persuasive argument. I believe this skill is helpful in any position. It is incredibly important for me since it is so easy to get weighed down by the large quantity of information.

What are your career goals?

My career goals are to return to graduate school for a joint degree focusing on international affairs and business administration. I am currently in the process of studying for the GRE and will be applying in fall 2018. After that, I would like to either create my own business or work for a large multinational company and head their environmental, social, and governance department to give back to communities in need and help offset the negative impacts of their business.

What advice do you have for prospective students?

There are two pieces of advice that I would give to prospective students. The first is to take all of your general education classes early in your academic career. If you don’t know what you want to major in, this can be great opportunity to try different subjects and find what you are passionate about. It also allows you to free up room for some of the classes you can take in later years that might not be within your major but are of interest to you. For example, the last class I took was a computer science course where I learned how to write code. It had nothing to do with my major but was always an interest of mine and was a fantastic experience. Part of the benefit of going to a school like Lewis & Clark is that you can explore your interests. This is also a reason why declaring a second major or a minor is a good idea, since it will allow you to explore things that interest you and become a more well-rounded individual.

The second piece of advice I have is that college is what you make of it. As cliché as that sounds, it is absolutely true. There are so many opportunities to learn, to create friendships, and have new experiences, but they all require initiative from you. If you want to do well and learn as much as you can, it will be up to you to take the time to talk to your professors and meet with them. Almost every week I met with my teachers because I was excited about learning and wanted to discuss the course in more detail. Every professor that I met with was just as enthusiastic about discussing the class with me and went out of their way to enrich my learning, but it was my responsibility to reach out to them in the first place. College isn’t easy, but it is such a fantastic experience to explore, learn, and become a better person.

What was your favorite class? How did it expand your knowledge?

My favorite class was International Political Economy taught by Assistant Professor Elizabeth Bennett. The course gave me a greater understanding of the history of modern economics and the interplay between politics and economics. I was able to use that foundation as a tool to think critically about the modern economic system to recognize both the good and the bad that comes with the system we are part of.

What was your favorite spot on campus?

My favorite spot on campus is the field below the reflecting pool. I love to take my dog there so that I can play fetch with her. It is absolutely gorgeous, and on a clear day, you can see Mount Hood through the trees.

What’s your favorite thing about living in Portland?

My favorite thing about living in Portland is that it is such an active city. There are local events going on all the time, and everyone is outdoors enjoying the beautiful Northwest. It is also small enough not to be overwhelming, but big enough to have professional sports teams: Go Blazers!

Did you have the opportunity to do research with a professor? If so, please describe the project and the experience.

I was lucky enough to work with Assistant Professor Elizabeth Bennett full time during the summer of 2016, and on the odd assignment here and there during the fall of 2016 and the summer of 2017. It was a fantastic experience—Professor Bennett is one of the most inspiring and influential people in my life, and I am so grateful to have been given a chance to work and learn with her. It was great to get to take part in each stage of the research process, and it taught me so much about standard-setting organizations. In total, I was able to contribute to five pieces being accepted for publication. One of the projects that stands out to me is when I had to go through around 20 various standard documents for different organizations to look at their rules on paying a living wage. Each document was at least 80 pages, meaning there was a lot of information to comb through. It was a ton of work but what we found was incredibly interesting and was a valuable addition to the existing literature on standard-setting organizations and living wages. It is also such a cool feeling to say that I contributed to the publications and see my name in the acknowledgments. It was especially meaningful for me as it was a large part of what ignited my passion for social justice, and was a great way to learn about one type of intervention (certifications) and its pros and cons.

My best memory and my biggest challenge at Lewis & Clark was going through the honors process and eventually being awarded honors for my senior thesis. I have never before worked so hard for something, and to go through all the trials and tribulations—such having to rewrite two of my three theories—meant that when I finally received the email saying that I was one of the three students who earned honors was such a rewarding experience.

Where did you find community on campus?

My community on campus was within the international affairs department. Being surrounded by so many bright and intellectually curious individuals was an amazing experience that only enriched my learning.

How has Lewis & Clark changed you?

Lewis & Clark has given me clarity on where I would like to go and what I would like to do in life. It helped me develop into a more well-rounded individual that is passionate and driven to achieve my goals in life. I met some of my best friends here, and experienced hardship and the reward of overcoming difficulties. It is genuinely hard to summarize how influential Lewis & Clark has been, but without a doubt in my mind, transferring to L&C was one of the best decisions I have ever made.