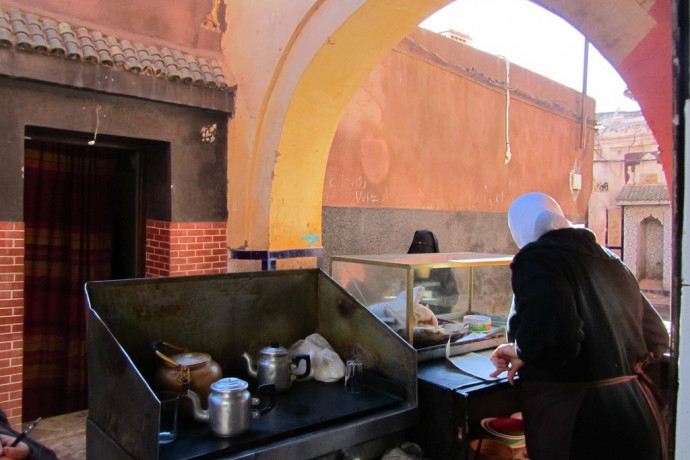 This program focuses on the history, culture, social dynamics, and socio-economic institutions of Morocco. The course of study includes Modern Standard Arabic (prior to departure) and intensive Moroccan Arabic, as well as the diverse religious heritage of the region, Morocco’s distinctive architecture and urban landscape, colonial and postcolonial experiences, modernization and globalization, and women and gender relations. The program is divided between three cities: Marrakesh, Agadir, and Fez. In each city, students take a language course and a content course. During the Marrakesh portion of the program (6 weeks), students take Moroccan Modernity at the Center for Language and Culture (CLC). During the Agadir portion of the program (4 weeks), students take Development and Sustainability in Morocco at Dar Si Hmad (DSH). During the Fez portion of the program, students take Gender and Society in Morocco at the International Institute for Languages and Cultures (INLAC).

“I am an American-born English Language teacher and language program coordinator. I started teaching in the United States in 1999 and then moved to Morocco in 2001 where I have been ever since. I taught for 8 years at the American Language Center in Marrakesh and then in 2009 co-founded the Center for Language & Culture, Morocco (CLC). In seven short years, the CLC has developed a wonderful reputation around Marrakesh and now has more than 3200 students. We also run international exchange programs mostly with American-based universities and NGOs. I also have three children that my wife and I are proud to be raising in the Kingdom of Morocco.”

Jamila Bargach is the Director and one of the founders of Dar Si Hmad. An anthropologist by training with a PhD from Rice University, she has taught at University Mohammed V in Rabat and worked at a number of NGOs in Morocco and overseas. Jamila has published several articles on adoption practices, unwed mothers, gender and development as well as the book Orphans of Islam: Family, Abandonment, and Secret Adoption in Morocco (2002). She is a lover of the South and truly believes that this region offers unique opportunities for students to learn about Morocco and to discover how applied development projects unfold in specific contexts.

Maisie Breit is the Ethnographic Field School Manager at Dar Si Hmad. Maisie is a New York City native who lived in Paris before moving to Agadir in September, 2016. She attended Dartmouth College, where she majored in women’s and gender studies and Middle Eastern studies, and first fell in love with Morocco during a semester abroad in Fes in 2008. Maisie returned to Morocco twice to lead programs for the Experiment in International Living, and spent 2014-2016 pursuing a Master’s degree in Human Rights and Humanitarian Action at Sciences Po Paris School of International Affairs (PSIA). She is especially passionate about women’s rights, being in the outdoors, hiking, hot yoga, and couscous.

Moja Ennaji is one of the founders and the Senior Professor of Linguistics and Cultural Studies. He was head of the English Department at the University of Fez, Morocco, and the Director of Arab Studies at Rutgers University. Moha Ennaji has taught various courses to American students from Rutgers University, Purdue University, William and Mary University, Dartmouth College, and others. He has published extensively on language, gender, and cultural studies with a focus on North Africa. He was also a Fulbright visiting scholar at the Universities of Arizona, Washington, and Pennsylvania.

About the Program Leader: Stepan Simek has been a faculty member at Lewis & Clark College since 2001. Previously, he taught at The Evergreen State College in Olympia, WA and at Reed College in Portland, OR. Originally from Prague, Czech Republic, Prof. Simek spent five years in Switzerland working as a director and assistant director at various theatres there, including the “Zurich Schauspielhaus.”

In the United States since 1987, Prof. Simek received his MFA in Directing at the University of Washington in 1995. He has directed more than 50 productions both professionally and in college settings in both the United States (Seattle, San Francisco, New York, and Portland) and in Europe, translated number of contemporary and classical plays from Czech, German, French, and Russian into English, and adapted several novels for the theatre including Oscar Wilde’s Picture of Dorian Gray, Franz Kafka’s early Amerika, and others. His work as a director was honored by the 1996 Drama League of New York with the “Drama League Directing Fellowship,” and his translations of two contemporary Czech plays earned him the 2006 “PEN America Translation Award.” As one of the authorized translators of the body of work of the former Czech President and playwright Vaclav Havel, Prof. Simek continues working on creating new American translations of contemporary European plays, and he has recently completed new translations of Anton Chekhov’s major plays into American English. In addition to teaching, directing in professional and college settings, translating, and adapting, Professor Simek has published numerous articles on the contemporary Czech theatre in the journal of international performance, “TheatreForum,” and the journal of “Slavic and East European Performance”. His translations appeared in several international anthologies. His research interests include contemporary and 20th Century Continental drama and theatre, and modern directors and directing techniques. Recently, Professor Simek embarked on a new research trajectory on the history, traditions, and contemporary practices of the Arab and Islamic theatre.

Check out this video by Molly Brown from the Spring 2017 program!

This course provides an intensive introduction to Darija, the Moroccan dialect of Arabic. Four weeks intensive study followed by continued study at regular intensity. Initial focus on “survival” language skills to be followed by broader study of the language. Emphasis on speaking skills, supplemented by use of written Arabic.

IS 215: Development and Sustainability in Morocco (4 credits)

This course will take students on a journey through the multiple and overlapping realities of contemporary life in Southwest Morocco. If one of the major challenges for a modern post-colonial national-state continues to be the prosperity of its population and the growth of its economies, in what ways are these faring today as the paradigms of modernity and bountiful natural resources are in crisis? This course will engage students in a study of energy concerns, livelihood quests, individual community hopes and aspirations, the larger frame of what is identified as “progress” and the role of development within such an endeavor.

This course explores Moroccan society, culture and politics in contemporary global context. Lectures, discussions, and field trips will be led by a variety of Moroccan experts, supplemented by regular discussions with program leader. Emphasis will be placed on Morocco’s vibrant participation in the dynamics of post-colonial state formation, modernization, and globalization—and the ambivalent effects of this participation. Also included is exploration of the literary, visual, and musical arts and the religious communities of modern Morocco. Students will be encouraged to connect classroom activities to their ongoing experiences of living in Morocco. Reading and writing assignments, journals, presentations, independent study projects, and field exercises are used to promote and test multifaceted approaches to learning.

This course examines the multifaceted relationships between women and men in Moroccan society. Beyond considering how gender formation and relations have been mediated by historically dynamic Islamic ideologies and institutions, the course attends to numerous other factors that have shaped gender identity, performance, and hierarchy. Particular attention will be paid to the ways in which gender intersects with other structures of identity formation and social life, such as ethnicity, class, and religion. Topics include: doctrinal norms and lived realities, language and gender, models of masculinity, Moroccan feminism and women’s rights, gender and international migration.

Course level will be determined by previous subject study and availability.

Excursions: The program includes group travel to other cities, such as Merzouga, San Cristobal de La Laguna (Tenerife, Canary Islands), Rabat, and Casablanca. The group also travels to the Sahara Desert for a week-long excursion.

Housing: Students will live with host families in Marrakesh and Fez, and stay in student apartments in Agadir. Living with host families is a crucial aspect of the program because it helps students gain insight into Moroccan culture and daily life. In Marrakesh and Fez, students will alternate between eating lunch at the study center and eating lunch with their host families, and most dinners will be eaten with the host families. In Agadir, students are responsible for purchasing and preparing their own meals, but the Overseas Office gives them a stipend to cover the cost of their food.

Cultural Activities: Students have the option to take cultural classes in music, dance, and calligraphy. Additionally, students are paired up with local students as speaking partners in Marrakesh and Fez, giving them the chance to practice their conversational Arabic and engage with Moroccan students. Students will also have opportunities to participate in cultural activities on the many program-wide excursions during the semester, such as the camel trek in the Sahara Desert and the guided tour of Rabat.

*Fees are updated every February for the following academic year.

**The Health & Wellness Fee supports the operations of Wellness Services staff in delivering pre-program orientation services, as well as in providing health-related consultation regarding participant health needs. All students in the College of Arts and Sciences pay a mandatory fee of $37 per semester. The fee will be waived for non-Lewis & Clark participants.

Stipend: Students will receive a stipend to cover the cost of meals and transportation costs not covered by the program fee.

Application Process: Applications are due one year before the start of the program. The semester before the program, students who have been accepted will meet regularly for orientation. This orientation is meant to prepare the students for life in Morocco by exploring literature and culture, and provides an opportunity for students to learn more about the logistical details of the program.

For more information about the application process, click here.

Travel: Students usually fly into the Marrakech airport, where they are meet as a group and travel together to the hotel.

Visa: Students will be required to apply for a visa in order to participate in this program. More information will be provided upon admission to the program.