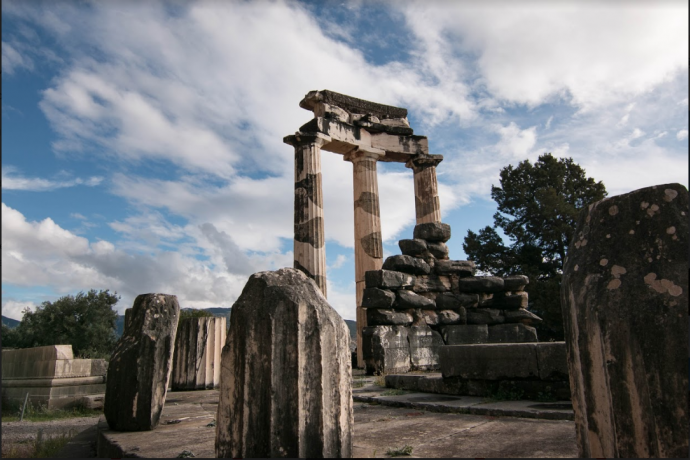 In cooperation with College Year in Athens (CYA), Lewis & Clark offers this program in Greece. Study and travel will focus on the history and culture of Greece from the Classical Period to the Byzantine Era. Based in Athens, the program will include extensive excursions to archaeological sites important for understanding the ancient Mediterranean world.

As an augment to the Lewis & Clark Classical Studies minor, this program provides students with the opportunity to experience the ancient Mediterranean world in ways on-campus faculty and programming cannot offer. The course on archaeology and hands-on archaeological experience ensure student exposure to one of the key dimensions of Classical Studies. The course on the Byzantine world brings students into contact with a part of the ancient world left uncovered in the on-campus curriculum, yet is an integral part of a broad Classical Studies program. The general culture course places the historically-focused content of the program in its contemporary context.

The Athens portion of the program (September, November until the end of semester) will use the facilities of College Year in Athens (CYA) as a home base for courses, library resources, computer labs, and orientation and support. The Lesvos portion of the program (October) will be based in the village of Thermi. The Lesbos sojourn will include hands-on archaeological experience and guided anthropological projects with home visits with local families. There will also be short excursions to the Peloponnese, Crete and Delphi.

About the Program Leader: Rob Kugler is the Paul S. Wright Professor of Christian Studies. He teaches courses on Jewish and Christian origins, Classical Greek, ancient Greek myth and religion, the Dead Sea Scrolls, method and theory in the study of religion, and in the College’s first-year core program.

His special area of research deals with the interface between the sociohistorical contexts of early Judaism and Christianity and the religions’ interpretation of their received texts and traditions. He is particularly engaged with interpretive traditions in the Dead Sea Scrolls and in Jewish and Christian literature from Greco-Roman Egypt, as well as with the documentary evidence for Judean life in Hellenistic Egypt. He is the author or co-editor of five books and numerous essays in edited volumes. He has also published articles in journals and proceedings such as Revue de Qumran, Dead Sea Discoveries, Journal for the Study of the Old Testament, Journal of Biblical Literature, and Zeitschrift für alttestamentliche Wissenschaft, and the Proceedings of the XXV International Congress of Papyrology.

A focused introduction to art and architecture of the ancient Mediterranean world from the Geometric period in the eighth century BCE to the end of the Roman Empire. Special attention given to the intersections of art and literature and the role of art as a tool of politics. Theories in classical culture about the visual image, the artist, and the practice of narrative; how our definition of classical art is often shaped by the views taken in the early modern period.

All students take 4 courses (see below for course descriptions):

2) CLAS 314: Topography and Monuments of Athens

Students abroad in Greece are faced with a double challenge: making sense of a new culture, in a language that is new to them. This course gives students the tools necessary to interpret and understand what’s going on around them, and to push past their first impressions of difference in order to evaluate the cultural logics and history behind what they observe. Students will receive an introduction to the Modern Greek language, making it possible for them to interact with people on a basic everyday level in their neighborhood, in their explorations of the city, and in their travels throughout Greece. The course also covers the important social changes that have transformed Greek society over the past 50 years, as well as the social concerns most pressing in Greek society today. Each class will be split into two parts: the first will be dedicated to language learning and will be conducted in Greek, and the second will be dedicated to the study of culture and will be conducted in English. Click here to view the syllabus from the Fall 2017 program (subject to change).

This site-based course gives a comprehensive overview of the topography, archaeology and history of Athens, focusing particularly on the great monuments of the Classical and Roman city. Every major site - and many minor ones - will be explored, paying attention to their physical setting, architectural and archaeological characteristics, and position in the political, religious and social lives of the Athenians. One of the main aims of the course is to investigate how an understanding of the physical fabric of Athens can inform important historical questions about Athenian Democracy, Empire, religion, political and social life. Students will trace the rediscovery of Athens’ antiquities from the 15th century to the development of scientific archaeology in the 19th, and will look the role of archaeology in Athens from the foundation of the Modern Greek state up to the present day. Click here to view the syllabus from the Fall 2017 program (subject to change).

CLAS 251: The History of the Byzantine Empire (4 credits)

This course focuses on the transformation of the eastern Roman Empire into a Greek Orthodox medieval empire and the creation of a separate identity for the Byzantine state and society. Topics include the organization of the Byzantine state; the development and defining features of Byzantine civilization; relations between Byzantium and the Latin West, the Slavic world, and Islam; the pivotal and unique role of Byzantium; and the factors that led to the decline of the empire and the eventual fall of Constantinople. In addition to a narrative of the main events that shaped the history of Byzantium during this long period of time, special emphasis will also be placed on various aspects of Byzantine history and culture, such as: the empire’s foreign and internal affairs; frontier strategy and Byzantium’s relationship with its neighbours; trade and the economy; art and architecture; the role of the emperor and the imperial administration in the government of the empire; the central role of religion in Byzantine society and culture and the emergence of the church as a dominant factor in state politics. Click here to view the syllabus from the Fall 2017 program (subject to change).

This course continues the introduction of the grammatical principles of ancient Attic Greek that was given in Greek 101. Once the basics of Greek grammar have been reviewed, the course will focus on readings in the religious and secular literature of the Hellenistic and classical periods. Students will examine the historical context of the texts they read, and explore the purpose, historical events, political views, and societal values that each text reflects. The course aims to help students improve their reading skills while also expanding their knowledge of the grammar and syntax of the language. Click here to view the syllabus from the Fall 2017 program (subject to change).

Aeschylus, Sophocles and Euripides are all a fascinating ‘way into’ the wider religious and political culture of fifth-century Athens and a rich part of the living tradition of theater today. This course combines both perspectives and seeks to answer the questions ‘What was Attic tragedy?’ (How and why did it emerge when it did?), ‘What is Attic tragedy?’ (What is its relevance and value in the theater today?), and ‘Are the first two questions different questions after all?’ The course combines traditional academic practices (lectures, seminars, the writing of papers) with an experimental ‘hands on’ approach. For the latter, students participate, in either onstage or offstage roles, in a workshop production of certain scenes from an ancient tragedy, intended to explore its theatrical nature and modern relevance.

Housing: In Athens, students will live in the CYA student apartments. A typical apartment houses four or five students (double and single rooms) and includes a common area, a kitchen (stocked with tableware and basic cooking equipment), bathroom and balcony. Apartments are simply but fully furnished, with clima units (heating/cooling) in each bedroom and WiFi Internet access. Each student has the use of a desk with locking drawer. Although each student receives space to store clothing and personal belongings, storage space is limited and students are advised not to over-pack. CYA provides a pillow, two blankets and a bedspread for each student. Students live within easy walking distance of grocery stores, cafes and restaurants, bakeries, dry-cleaning shops, banks, and other amenities, including a lively, weekly outdoor “people’s market” offering fresh fruit and vegetables, fish, and flowers. There are generally no more than a few CYA apartments within a given building. The advantage of these accommodations over typical student dormitories is that students have a greater opportunity to interact with their Greek neighbors and generally live like Athenians do.

*Fees are updated every February for the following academic year.

**The Health & Wellness Fee supports the operations of Wellness Services staff in delivering pre-program orientation services, as well as in providing health-related consultation regarding participant health needs. All students in the College of Arts and Sciences pay a mandatory fee of $37 per semester.

Stipend: Students will receive a stipend to cover the cost of meals and transportation costs not covered by the program fee.

Application Process: Applications are due one year before the start of the program. The semester before the program, students who have been accepted will meet regularly for orientation. This orientation is meant to prepare the students for life in Greece by exploring literature and culture, and provides an opportunity for students to learn more about the logistical details of the program.

For more information about the application process, click here.

Travel: Students usually fly into Athens International Airport (ATH), where they are met by CYA staff, who will help them navigate taxis or public transportation and will give them their apartment keys.

Visa: Students will be required to apply for a visa in order to participate in this program. Students are required to visit a consulate in their jurisdiction to make a personal appearance to apply for this visa. The nearest consulate that serves the Portland, Oregon area is San Francisco. More information will be provided upon admission to the program.