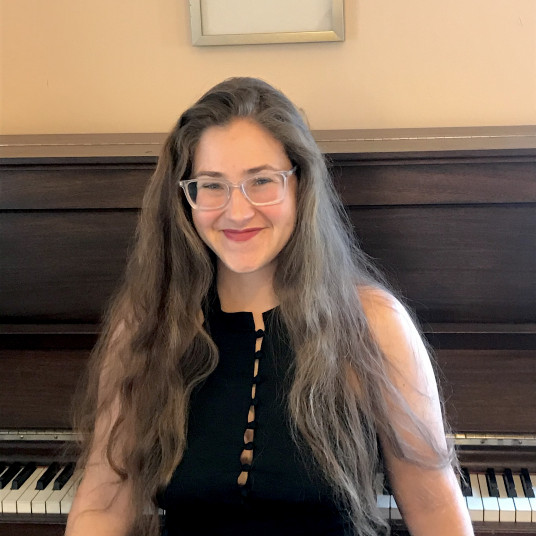 I knew I wanted to continue studying music through college, while also getting the broader education that a liberal arts college provides. What solidified my choice was meeting Susan Smith, the director of piano, the first time I visited campus. I was completely taken by her kindness, clarity, and thoughtfulness regarding music, as well as the lush and wooded grounds of the campus.

How do you describe the liberal arts?

Like a fruit pie – a little of everything to create a flavorful dish with whipped cream on top and a flakey crust!

Why did you major in music?

When I decided on L&C it was not entirely with the intention of majoring in music. In my first year, I was in band playing the flute, took weekly piano lessons with Susan Smith, stage managed for the music department, and immersed myself in music and art! By the end of my first year, I had realized there was nothing I loved more than piano. I wanted to dedicate the next four years, and beyond, to the pursuit of music.

What was your favorite class? How did it expand your knowledge?

My favorite class was MATH 103, Perspectives in Mathematics, which is the non-major intro into math. The year I took it, it was taught by Paul Allen, who focused the class on topology, which is the study of geometry, maps, and space. As a subject that was far out of my sphere of interests (which was entirely music by that point), it was the most fascinating class I took. Professor Allen introduced me to the mind expanding thought that concrete ideas are also amorphous, and that one could conceivably shrink down every object to the most basic of geometric shapes, like a square or a circle or a donut. This affected how I analyzed and learned music, breaking down difficult passages to their smallest building blocks while still maintaining the larger structure.

Who is your mentor on campus? Why do you consider this person your mentor?

My mentor was Susan Smith. As my piano teacher, she guided my musical, artistic, and technical training on the piano. Piano study is one on one, and we had an intimate and close relationship.

“Lewis & Clark opened doors for me and helped me get a foothold in the Portland music scene.”

What have you been doing since graduation?

I teach a large piano studio throughout the Pacfic Northwest and I frequently perform in the Portland area, both solo and collaborative. I currently study with Thomas Otten. I have continued my work with Girl Circus, an all-woman circus that brings circus arts and training to girls in the PNW.

Lewis & Clark opened doors for me and helped me get a foothold in the Portland music scene. My professors and colleagues introduced me to influential musicians, including my current teacher, and prepared me for performing, teaching, arts management, and stage managing. L&C classes and seminars gave me the confidence to communicate freely and with ease and to believe in myself and my own ideas. I am lucky to still be making connections through L&C.

Now that you’ve been out of college for a while, what would you say is the most important thing you learned at Lewis & Clark?

Self-reflection, self-discipline, motivation, perseverance, and organizational skills are important for all facets of life. It is super important to take time for yourself and reflect. The key is to do the things that make you happy!

What are your career goals?

My ultimate goal is to be a concert pianist and delve into compositions of POC and women, both historic and current. I have already achieved some of my mini goals, like teaching piano and having a large piano studio, and I am working towards getting a master’s and doctorate in piano performance. You can follow my progress on my website or on instagram.