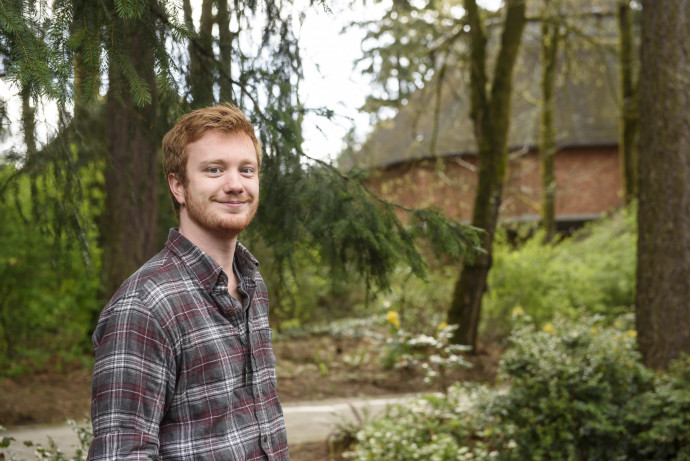 When I was a prospective student, I visited the campus on my own. While I was walking around, taking in the sights, a professor came out of her building and saw me carrying the bright orange folder that they give you in Admissions. She smiled at me and asked me questions about myself as she joined me on my walk. As a Spanish professor, she asked me if I knew any Spanish, and we talked for a few minutes as I got to practice. She encouraged me to have fun on my visit and that she looked forward to having me in my class before we parted ways. That is not an experience that I got at any other college that I looked at.

“We only handicap ourselves if we don’t try to understand the world from someone else’s point of view, and explore the scary idea that we ourselves might be wrong.”

In what ways did you change as a result of your ENVS major?

When I first started taking ENVS 160 with Liz Safran, associate professor of geological science, I think I brought with me a long list of core truths about the environment that I had spent my high school career defending: climate change is real, fossil fuels are bad, renewable are the way to go, people should leave nature alone and stop exploiting it for resources, etc. Those core assumptions get more and more fluid the more you progress in the major. Things that once seemed simple now look dreadfully complicated. Nothing is as black and white as you first assumed. The real world, the one you live in and don’t just argue with people about, is messy. There isn’t one big solution to all our problems. The “big picture” is made up of a lot of little pictures, and those little pictures include the lives and livelihoods of real, tangible human beings. It’s humbling, and it forces you to grow up fast.

What were the biggest challenges to you in ENVS that ultimately were worth the effort you put into them?

Research is an essential skill. You need to know what you’re talking about, and you need to know how to find what you need. You also need to learn to temper your expectations: you’re probably never going to find that “perfect” source that defends your entire argument, and if you do, why bother restating it word for word? You need to be ready to have your viewpoints challenged: what you believe may not necessarily be the consensus, and the consensus may be a lot more complex than you can really put into words. But learning to find sources, learning how to read data and interpret results and contextualize them within the broader world, is a skill that, if you put the time and energy into it, makes you a better scholar and a stronger student.

How did you weave your experiences outside ENVS (e.g., an overseas program, an internship, a course in another department) into your ENVS major?

When I went to New Zealand, my program spent a lot of time talking with, engaging with, and immersing ourselves in Maori culture. The Maori are the indigenous people of Aotearoa, and they have been persecuted and Westernized for decades. Pre-colonial Maori had knowledge that they passed down through generations: what time of year to plant what foods, how to read the positions of stars, what plants were used in certain ways. With the introduction of the Europeans invaders, much of this knowledge was dismissed as superstition in favor of the Western scientific method. Only now are people beginning to realize that these people who spent centuries living on these islands and observing their surroundings just might have been right, and far more attuned to the natural world than we were. But because it wasn’t recorded and analyzed using the scientific method, it was deemed unreliable and inconsequential. There are many ways to look at the world. Every culture has their own knowledge system. We only assign them validity based on our own cultural knowledge system. Neither the Maori nor the Westerners know everything, nor are either right 100 percent of the time. But we only handicap ourselves if we don’t try to understand the world from someone else’s point of view, and explore the scary idea that we ourselves might be wrong.

What is one thing you’re proud of in your ENVS capstone, and where do you think it may take you in future?

My concentration is in the place of American film and television in the discourses surrounding climate change, conservation, and environmental justice. Essentially, I study how we talk about nature and environment in movies and TV. For my capstone, I presented my findings in a video essay, a kind of videographic criticism which uses visuals to help argue about visuals. It was a long but fun project in which I got to work with editing software, a process that I really enjoy. Video editing is definitely a marketable skill that I want to keep practicing and using in my personal and professional life. But the purpose of the video is to try and take my research and present it in an accessible form to a nonacademic audience who may not have the time nor the context to dive into another academic paper. It’s this practice of communication, of trying to make science as accessible as possible, that I want to continue going forward after graduation.

How does the phrase Environment Across Boundaries apply to your own experiences in ENVS, and what will you carry forward from these experiences as you take next steps in your life?

During my sophomore year in ENVS, I was lucky enough to take a field trip with my class to Willapa Bay, Washington, where the majority of the nation’s oysters are farmed. The area is deep in a struggle between local oyster farmers and Taylor Shellfish, described by some as the “Monsanto of aquaculture.” No matter how you looked at it, no one was the clear “good guy” and no one was the clear “bad guy.” But we talked to every major player in that town: farmers, scientists, Taylor employees, hotel managers, even a retired naval oceanologist. Each one had strong feelings toward all of the others, both positive and negative. Each had different backgrounds, economic beliefs, and levels of education. All had a stake in the future of the area. These were people who were living the reality that we are safely able to discuss and dissect from hundreds of miles away in our classrooms, without risking anything. Sometimes we need to come down from our castle on the hill and immerse ourselves, spatially and emotionally, in the issues nearest and dearest to our hearts. I don’t think we can say that we have a valid perspective until we challenge it. That challenge comes from getting out of your comfort zone, speaking with people who you disagree with, and investing your own time and energy into something. That’s what Environment Across Boundaries means. Don’t wait for people to come to you. Go out and meet them.

What advice do you have for prospective students?

Grades seem important. But they’re not a reflection of how much you learn or how smart you are. Don’t just try to get a good grade in class: make it your priority to get something out of it. That can be a new unique perspective, an idea that sparks something in you and that you want to follow, or just the knowledge that, “Hey, maybe this isn’t quite for me.” All of those are valid. If you focus on trying to learn and get something out of it, the grades follow. Not the other way around.

What’s your favorite spot on campus?

The bench swing behind Odell hall.

What’s your favorite thing about living in Portland?

Nature is just a few steps away.

How did you decide on a major?

The ENVS department is open and welcoming and invested in me as a student and as a person. I wanted to be a part of that culture.

What have been the biggest challenges you have faced at Lewis & Clark?

Don’t isolate yourself. It’s very easy to get tunnel vision, but I guarantee you that you are surrounded by beautiful nature and by beautiful people. Find something outside of school that can make you happy. Pursue your interests. Spend time with people you care about. That’s just as much of the point of being in college as the classes themselves.

How do you manage stress?

Take a step or two back. Get off campus. Distance yourself from these problems that run rampant around your head, and they suddenly seem smaller when pressed up against the horizon.

Where do you find community on campus?

Athletics, clubs, study abroad trips, majors. You’ve got a lot of points of overlap with people, many more than you think. Open your brain to the possibilities.