Françoise Duréssé presents herself as queen nappy, transforming the complexity of her personal experiences into a poetic dialog. Queen Nappy juxtaposes collages of racist dialogues, printed text, images from history,popular culture, and contemporary events into a visual context. Through this lens, we may examine the discourse of racism.

Françoise Duréssé is a tenure-track assistant professor at Drexel University in Philadelphia. She has exhibited her work in The United States, Europe and the Middle East. Recently she accepted an invitation to exhibit in the 2007 Florence Biennale. Her artwork combines self-portraiture with media images of people of colour to explore the ways in which assigned media roles serve to reinforce negative cultural expectations and stereotypes. 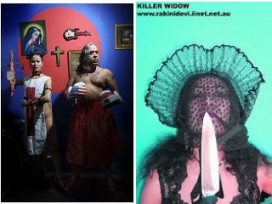 Guillermo Gómez-Peña is performance artist and writer based in San Francisco, who directs the interdisciplinary arts troupe La Pocha Nostra. His works centers on the borders, physical and otherwise, between his two countries and between the mainstream U.S. and Latino cultures in general. His latest book, Ethno-techno: Writings in Performance, Pedagogy and Activism, was published in 2005. 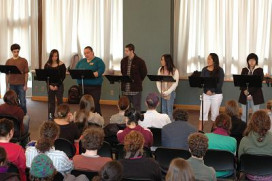 Students of color rage against racism, tokenism and silence. They struggle with notions of self-righteousness, labels, and the boxed identity through stories, dialog, and spoken word. 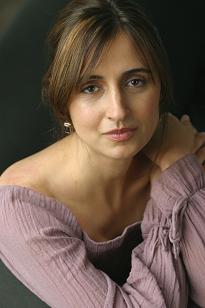 A founding member of the Iran Human Rights Documentation Center, Roya Hakakian serves on the board of Refugees International and is a fellow at Yale University’s Whitney Humanities Center. She has appeared on CSPAN-Book TV, CNN International, CBS Early Show, and Now with Bill Moyers, speaking about the Middle East and human rights. A writer and poet, her memoir of growing up Jewish in post-revolutionary Iran, Journey from the Land of No, has received much acclaim including the Persian Heritage Foundation’s Latifeh Yarshater Literary Award.