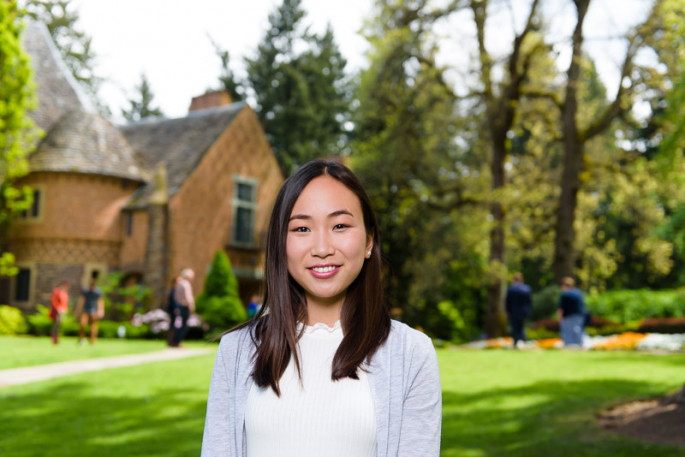 Oishi says receiving the award is an incredible honor.

“I feel really lucky to have been at a school where it’s easy for women to become leaders in their community. I’ve had brilliant role models in the international affairs department, like Associate Professor Heather Smith-Cannoy and Assistant Professor Elizabeth Bennett, to look up to. And beyond that, I’ve had the opportunity to take on many leadership roles and work with so many other great women in my classes and extracurriculars. I know it can be hard for women in the working world, and for that reason I’m really thankful that I got the chance have those kinds of experiences before I even graduated.”

I feel really lucky to have been at a school where it’s easy for women to become leaders in their community. I’ve had brilliant role models.

“Nina possesses that truly rare combination of keen intellect, compassion, and intellectual curiosity,” Smith-Cannoy shared. “It was apparent to me from our early days of working together in international law that she is motivated from a sincere desire to make the world a better place—and I have no doubt that she will. It has been my great privilege to guide her on her path.”

Oishi’s interest in international human rights law led her to write her senior honors thesis on the case of Uganda’s self-referral to the International Criminal Court (ICC), which is the highest court in the world for abuses like war crimes and crimes against humanity.

“And because I received the Barbara Hirschi Neely Scholarship, I got to use my stipend to actually visit [the Netherlands], go to the ICC in The Hague, and watch the trials as part of my research,” Oishi explained. “It was an amazing experience to write my thesis and see how it applied to real life. As I take my next steps, that experience at the ICC and getting to watch those lawyers at work has been serving as a motivator for me as a place where I’d love to work one day.”

Oishi plans on going to law school in one or two years, “something [Senior Lecturer] Cyrus Partovi long pushed me to do,” she added. In the meantime, Oishi has already moved to Boston where she’ll be working at a nonprofit focused on national consumer healthcare advocacy.