On April 16th, 2015, The Center for Entrepreneurship hosted Gina Bianchini as their guest and speaker for the Dinner with an Entrepreneur Series.  Over 60 students turned out for this event and to hear Gina’s story and perspective on entrepreneurship in Silicon Valley.

Gina has been featured as one of NPR’s “5 Nerds to Watch,” Marie Claire’s “20 Women Who Are Changing the Ratio,” Huffington Post’s “10 Technology Ultimate Game Changers,” and TechCrunch’s “40 Over 40.” Gina and Mightybell have been featured in Fast Company, Bloomberg BusinessWeek, Business Insider, The New York Times and The Wall Street Journal. She has also appeared on Charlie Rose, CNBC, CNN and Fox Business.

She was raised in Cupertino, California, graduated with honors from Stanford University and received her M.B.A from Stanford Business School.

A: From a theoretical definition, I look at it as the ability to see opportunity and turn an idea into reality.  In even shorter hand: creating something out of nothing.  Especially in times or moments where I’m tired or I’ve just had a set-back or I’m frustrated, the way I get out of it is having a moment where I say, you know what’s cool, you could probably drop me anywhere in the world and I would figure it out.  I would figure it out, and not only that, I have the skills today to see opportunity where it exists, to find and recruit good people, to be able to know what I’m looking for in terms of putting together a team—being able to lead that team. And especially in my experience, diverse teams win from a variety of perspectives—so understanding diversity not only from a skills perspective, or people from different countries, backgrounds, gender, or identities, but also from the perspective of different personality types.  So making sure you have people on a team who can bring together the best execution and best new ideas, because so much of pointing over there and saying, we’re going to get there, is a process of understanding where the roadblocks are, and where you’re failing a lot.

Q: Could you explain the evolution of Lean In, going from Ning to Mightybell, and connecting with Sheryl Sandberg?

A: Sheryl Sandberg is a friend of mine and was telling me she had written this book and what it was about.  And I was like we need to do this as something bigger.  Let’s see if we could create a movement around this.  And imagine we could do something where we would encourage, particularly women, but certainly women and men to be able to form small groups, to navigate what I saw and continue to see as the main challenge of diversity of any kind… the research is pretty clear on what some of the challenges as well as what some of the solutions are, and how could we take this book and Sheryl’s advocacy and turn it into something bigger… and it has truly taken on a life of its own with something like 60,000 of these Lean In circles all around the world… The thing that is exciting to me is that Lean In has a team, a dedicated team, and that’s a perfect example of, it started off as an idea, a book she wrote, an idea I had accelerated, and we turned the gas on by pulling in a bunch of people, and then now it’s taken off in ways that really cool stuff is happening and it speaks to the power of networks… it’s all it takes to do something meaningful and different than the status quo, that is fundamentally my lesson of Lean In and what I take away from it.

Q: Do you have some recommendations about how to go about forming networks with the people around you but also the people outside in the real world?

A: As I was thinking about it, one of the things we don’t talk a lot about and is incredibly important, and it can start tonight in this room, is the importance of networking with people who are not like you.  If you are a computer science major, making sure that you know and spend time with rhetoric majors or understand and find opportunities to work on projects and in the capacity of a club or an institute where you are building relationships with people who have complementary but different skills than you do, perspectives or backgrounds than you do… That has been the thread in my career that has been the most meaningful…  I believe that for all of us, it begins with starting with people that are one or two degrees away from you, even here, even right now. 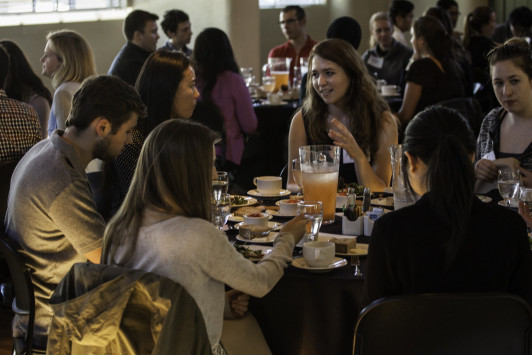