On February 26th, 2015, The Center for Entrepreneurship hosted Michelle Lantow, Chief Administrative Officer (CAO) for New Seasons Market, as a guest and speaker for their Dinner with an Entrepreneur Series.

It’s always great to hear about the different journeys and paths people take in life. Listening to successful entrepreneurs talk about their ups and downs is always eye opening and let’s us, as students, know nothing is ever as linear and set as we may think.

During the evening, she related events about her life, about her background in accounting, that she had worked for many large companies, including LUCY and The Gap.  Eventually though she found her way over to New Seasons Market and the position of CAO.  Her path getting there was no easy task.

She spoke about how she drank over 100 cups of coffee while meeting and networking with a variety of people in order to find a new opportunity, and because of that never-give-up spirit she landed the role with New Seasons.  She preached the importance of networking and communication and how even though somebody may not have a job opening for you, they can point you in the right direction.  Her tenacity and positive attitude in regards to job hunting was inspiring and was especially helpful to hear for the graduating seniors in the room.

She elaborated on how you can be entrepreneurial even when you least expect it. She joked about how when she was asked to speak at the Dinner Series event she didn’t know what she would talk about.  Being in accounting her whole life she had never thought of herself as an entrepreneur, but realized that there is a lot she had accomplished that was, in fact, entrepreneurial, like an initiative she implemented at New Seasons to help local vendors get their products on the shelves.

Overall it was a great night for students with both delicious food and an insightful entrepreneurial speaker.  The Center for Entrepreneurship provided students a rare opportunity–not everyday can you sit down and have dinner with the CAO of a large regional company!  Students are grateful for these dinners and already looking forward to the next one. I don’t graduate for another year and a half, but I’m already excited for all the cups of coffee that are ahead in my future. 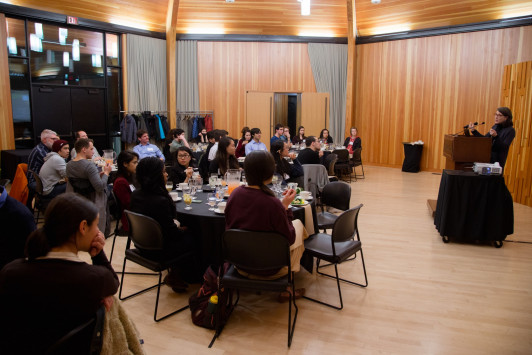