From those who have helped shape our community for decades to those who only recently began their Lewis & Clark journey, the Impact Awards honor individuals who make the campus a more inclusive place. Since 2006, the Department of Inclusion and Multicultural Engagement recognizes community members for their contributions toward developing and supporting a diverse and inclusive campus community.

During the IME Banquet on April 2, 2014, over 100 students, staff, faculty, alumni, and community members gathered to honor our graduating seniors and to congratulate the recipients of this year’s 2014 Impact Awards.

“We are so thrilled tonight to celebrate seniors and acknowledge the significant contributions so many in our community have made to promote diversity and inclusion at Lewis & Clark and the greater community,” said Jessika Chi, Program Manager for IME. 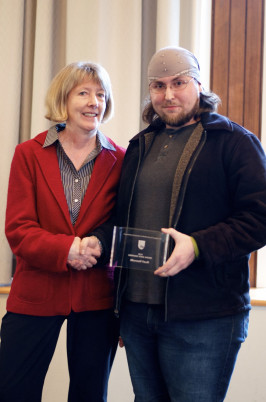 Maxwell Faulk transferred from Portland Community College to Lewis & Clark this past fall. He joined our campus as what we call a “new traditional” student, an adult learner who is slightly older than many of our undergraduates, and the product of hard work and perseverance as a PCC Roots Program participant which helps first generation, lower SES college students persist and succeed through college. While he was at PCC, he was very involved in camps life, and his transition to LC was no exception.

Maxwell immediately joined the LC football team as a walk-on, quickly became involved with the Feminist Student Union, and has also taken leadership in resurrecting the former ANTS organization, which was the Association of Non-Traditional Students.

Tricia Brand says of Maxwell “I am truly inspired by Maxwell, and all that he is navigating to accomplish his goals in college. I am also aware of his mission to create more opportunities for marginalized voices on campus to be given visibility and voice, like the ANTS or supporting events in IME or as an advocate and members of the FSU. He is looking to give back to this community, recognizing that he will gain immensely more from these experiences than he could possible contribute.” 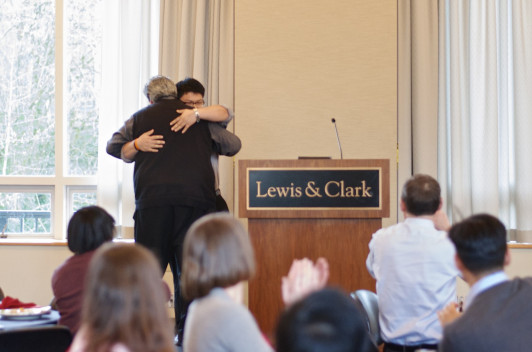 The newly named Kristi Williams Community Impact Award is given to someone (student, student group, faculty, or staff) who goes above their role and responsibilities to create a diverse and inclusive campus community. The recipient is someone who has made a true and lasting impact on the Lewis & Clark Community

We know Mark Figueroa as our Associate Provost for Institutional Research and Planning but to many Lewis & Clark community members, he is so much more. Student and student athlete, Joe Iliscupidez called Mark “a father figure to many of the boys on the football team.” Phil Magbanua says of Mark “he has been a great ambassador the betterment of the Lewis & Clark community in terms of inclusion and social justice. He has been a vital cog in the recruitment and retention of students with many different types of backgrounds and beliefs. He is a mentor for students, faculty, and staff.” 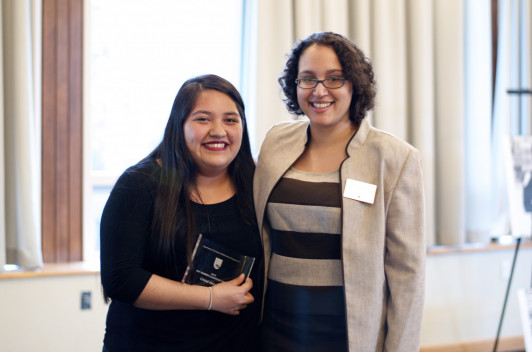 Cristal Almonte has led and participated in activities that helped promote awareness about multicultural education both here at LC and in the broader Portland community. She is heavily involved with MOSAIC and CEESA, volunteers for the Smart and Open Meadow program, coordinated a Spring Fly-In program, and has been a Gente Latina Unida representative. She started a multicultural group in Robert Gray Middle School that will provide a safe space for students seeking to talk about their cultural identities.

Eduardo Rivas says of Cristal “Cristal has touched my life like no other person has and has supported me throughout the difficult problems that I have gone through. It has been a great pleasure to have known this person and seeing such a wonderful, caring, and powerful person that doesn’t stop until they get the changes that they want.”

Dr. Diana Leonard presented the award to Cristal and says of her “I remember how she wanted to make the Spring Fly-In even more effective while embodying the truth-in-advertising mission posed by the Walk the Talk initiative. This to me is the mark of a truly dedicated community leader: someone who continually questions how to best serve, rather than basking in the glow of past triumphs.”

We want to say congratulations to the nominees and recipients of the 2014 Impact Awards and a thank you to the nominators who took the time to write such thoughtful nominations. 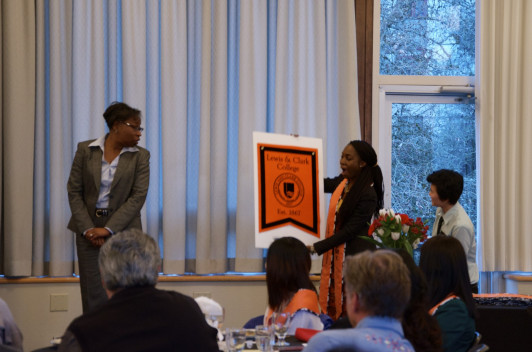 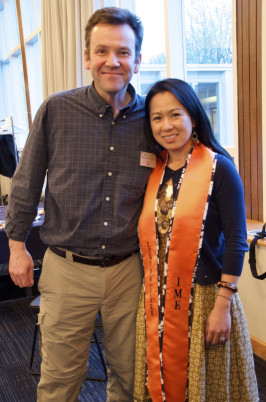 The night ended with a tribute to the graduating seniors, some who were able to give a brief reflection about their time at Lewis & Clark. Congratulations to the Class of 2014! 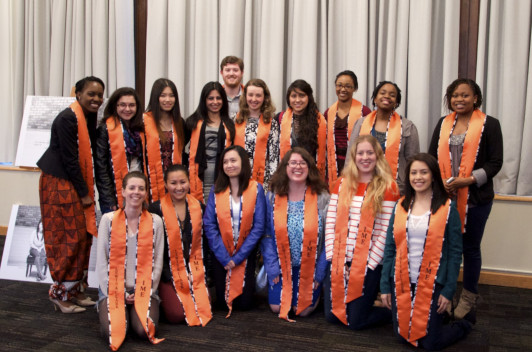 To see all of the photos from the banquet, please visit our 2014 IME Banquet Gallery