Angela Webber BA ’10, along with her sister Aubrey, made Portland history by raising over $80,000 on Kickstarter for their geek-pop band, The Doubleclicks. The Career Development Center recently caught up with Angela to learn more about her music, her advice to other young alumni, and what made The Doubleclicks’ Kickstarter campaign such a success.

Can you tell us a bit about your journey from Lewis & Clark to The Doubleclicks? What inspired you to pursue music?

When I graduated from Lewis & Clark, my plan was to become a journalist. I had done a few internships while in college and had another lined up for the summer after graduation. After that, I was really lucky to find a real job as a newspaper reporter in the Portland area. On the side, I was writing songs with my sister in my spare time, a hobby I had picked up during college as a low-stress creative outlet. We took songs to a couple open mics around town, and they were really well-received. People told us it was a welcome break to have a little comedy in between all the mopey breakup songs.

We started taking it a little more seriously when I was done with school and had more free time, and then we put some songs and videos up on the Internet, with the help of animator and LC grad Brad Jonas, and things really started taking off! We put more and more time into it and eventually it got to the point where we were touring too much for me to responsibly keep my day job, so I quit! I jumped into the deep end, and now we’re doing it: last year we drove over 8,000 miles to tour all over the country, we’re currently working on our third full-length album, and I produce a regular geeky variety show which allows me to bring my favorite musicians, comedians and geek celebrities in to Portland to perform. 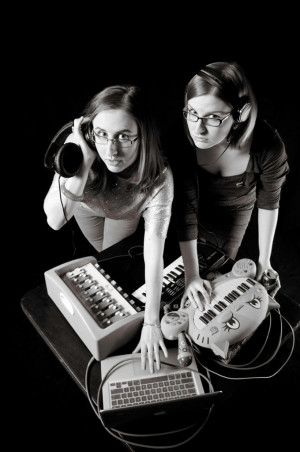 On the left: Aubrey; On the right: Angela. Photo by Cahoots Photography.We understand that you just broke the Portland record for most money raised for a music project via Kickstarter. Congratulations! What do you think made your fundraising campaign such a success?

In a way, we have been laying the groundwork for a crowdfunding campaign for years at this point. We have built a big mailing list, a big Twitter following, and a big Facebook following as well by touring and collecting email addresses, by releasing a lot of videos online, and by networking with other nerd people, musical and otherwise. I think that work, along with a really plugged-in, supportive, nerdy audience, was a great bonus for us.


What skills do you draw on from your Lewis & Clark/liberal arts education in your day-to-day life?

The education I got at Lewis & Clark has been a huge bonus for me, even though I’m not exactly working within my major. I’m glad I had a broad range of classes, because I draw on specific skills from Economics to Poetry to Multimedia/film in running our band business. The ability to write, read and communicate can’t be underestimated either—I write all the time and the years of practice helps me a ton. Additionally, I am really very thankful for the skills I gained in my out-of-class activities: I learned how to plan events by being a Resident Advisor, how to write, network and email by working at the Pioneer Log, and how to do all kinds of great tech things by working for IT. My time at LC was hugely valuable and I’m very thankful for the education. Plus it gives me a lot of material to write songs about.

What roadblocks have you encountered along the way, and what have you done to overcome them?

After Lewis & Clark it can feel a little overwhelming; I went from a rigorously scheduled world with a clear end goal to the big, nebulous “real world.” It can be scary and paralyzing, because you don’t want to make a bad choice. I reached out for help a lot and tried to gather information. I did informational interviews with people in careers from private investigation to wedding planning—and was surprised how open people were to talking to me, not just about their careers but also life in general; people are happy to share their life lessons with students or recent grads, and they can provide information that eliminates the big question marks in the future.

I’ve also found it’s really helpful to set goals and write them down, even if you end up changing direction or you aren’t quite sure where or what you’re going to be in 2 or 5 years. Just having a goal keeps me moving and creating, which is better than being afraid to act and being stagnate.

What advice would you give graduating seniors interested in pursuing music or any other creative venture?

A lot of people approach music or another creative endeavor by tacking it on as a “side project” to a “real job” or even a “day job.” That seems like a wise financial decision. The other approach is to do what I did (which is not as wise, financially)—just go for it. Don’t allow a backup plan to become your main plan. Being hungry and working for yourself is a great motivator, and setting goals is really essential.

Get out of your house and get engaged in a community and stay in touch with your fellow Pios!