Arsalan Iftikhar, a human rights lawyer, global media commentator, and author of Islamic Pacifism: Global Muslims in the Post-Osama Era, gave a lecture at Lewis & Clark on September 30, 2013 about Muslim identity and Islamophobia in our post 9/11 world.

Arsalan serves as Senior Editor for The Islamic Monthly magazine and is a regular weeky commentator for National Public Radio (NPR) on domestic and international issues affecting our world today. Arsalan was also a featured interview for a December 2012 ABC News documentary called “Back to the Beginning” by Emmy-award winning journalist Christiane Amanpour on the major world religions and he was also quoted extensively in an August 2010 TIME Magazine cover story on Islamophobia in America today.

Arsalan’s lecture, titled “Muslim Identity in Post 9/11 America: Islam, Race, and U.S. Civil Rights,” explored the anti-Muslim rhetoric that has continued to seep into our nation which has led to the next chapter of our civil rights history.

Using a narrative history approach, Arsalan spoke about some of the key events that have happened since 9/11 such as the war on Afghanistan and Iran, the USA Patriot Act, the “Ground Zero Mosque” and the election of President of Barack Obama. Arsalan ties these events together in a narrative history that shows the impact of these events on the people of Arab, Muslim, and South Asian descent. His narrative history took the audience through the domino effect of the legal dragnets of 9/11, which led to the legislative and political dragnets, which then made its way into the media. From there, the bigotry and racism that has become known as Islamophobia was born.

Arsalan gave a sampling of the anti-Muslim and anti-Islam rhetoric that made its way into American discourse. The seething anti-Muslim rhetoric at the highest levels (from the media to our elected officials and leaders) trickled down into hate crimes. Asralan demonstrated the absurdity of the notion that being Arab and being a good person are somehow mutually exclusive in our current American discourse.

He says, “even though we have made great strides, we are not by any means in a post-racial America. If anything, identity politics means more today than it ever has before.”

Arsalan believes that we are in the next chapter of civil rights history. From the persecution of Catholics during the turn of the century, to WWII and the internment of over 140,000 Japanese Americans, to the Jim Crow laws and the African American Civil Rights struggle that still continues today, to now the post 9/11 era that deals with privacy issues, the internet, racial profiling, and tomorrow: “it will be somebody else.”

He continues to say “It is important to understand that even though we might not look the same, come from similar backgrounds, or even believe in the same things, we are in it together, as members of the human race. We have to look out for one another, reach out and get to know one another. We need to humanize ourselves to one another.”

To the students he gives his final advice:

“You are the future leaders of America and the world…I want you to teach the diversity that you learn here at Lewis & Clark with your family members. Educate one person about something that has nothing to do with your own experience. Learn about different religions, different cultures, and different languages. Get out of your comfort zone and into someone else’s comfort zone. I promise you, it will enrich your life in a way that you could never image.” 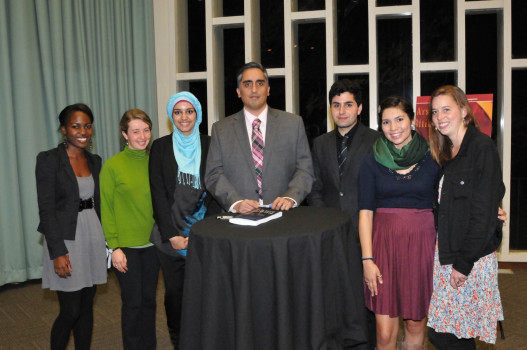 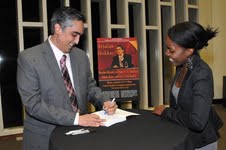 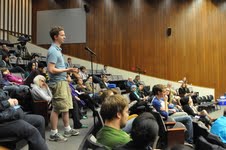 Arsalan answered questions from the audience after the lecture and signed copies of his book. You can connect with Arsalan and continue the conversation on twitter @themuslimguy or visit his website: www.themuslimguy.com.