Studying Japanese at Lewis & Clark, you’ll be engaged in a program that combines rigorous language instruction with constant connections to Japanese culture and society.  We offer four years of language teaching, starting with Beginning Japanese and progressing all the way to Advanced Readings classes, which incorporate essays, novels, films and independent research.  Our Residential Language Community, housed in the campus Apartments, provides immersion in a Japanese-speaking environment.  Our Japan club and other Japan-themed organizations bring together students from all over campus for movie nights, calligraphy, karaoke, Japanese cooking, anime.  Whether you’re interested in trying a new language, studying abroad in Japan, or simply finding out more about Japanese culture, Lewis & Clark will open the doors to a rewarding encounter with Japan.

I. Beginning and Intermediate Japanese

The first two years of language study at Lewis & Clark focus on solidifying the basics of communication, focusing on the four components of listening, speaking, reading and writing, as well as on the teaching of cultural components of getting around in Japan.  Students meet regularly with their native-speaker language partners, they 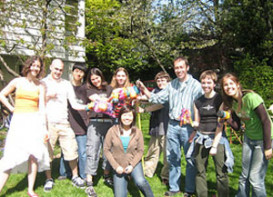 keep a Japanese journal, they watch TV clips and movies, all in an effort to augment their proficiency in Japanese.

The third and fourth years of language study increasingly concentrate on advanced forms in written and spoken Japanese.  The third-year class this year did a month-long lesson on murder-mysteries, reading stories, watching a Japanese TV detective drama, and, finally, making a short episode of their own crime drama.  The fourth-year class focuses on culture and society in the Fall, reading about youth, modern society and, this year, food-culture in Japan.  In the Spring, students focus on fiction and non-fiction, readings works by Murakami Haruki, Kawabata Yasunari and others.  Students are expected to write papers and do independent research in Japanese by the end of the semester.

The Japan Club is active in bringing Japanese culture to all students on campus.  Students regularly meet to practice taiko drumming (a good work-out to boot), prepare and eat okonomiyaki and sushi, 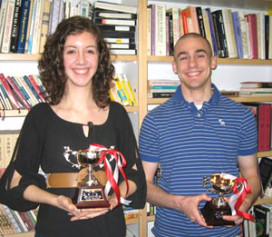 practice calligraphy, as well as a host of other activities.   Japan Night in the Dining Hall this year had several dozen students singing, dancing, and drumming.  The Japanese Language Table allows students to meet with native speakers in the Dining Hall to practice their Japanese.  These are just a few of the many activities that make Lewis & Clark a great place to learn about Japan.

It comes as no surprise, then, that Lewis & Clark regularly wins numerous awards at the NW Toyama Cup speech contest, a contest that brings students from all over the NW to compete for a trip to Japan.  We’ve had a winner in at least one category every year that we’ve competed!