Year of Study in Munich

Courses are offered on the basis of students’ interest and demand. 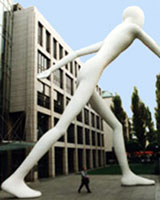 This towering landmark stands near the end of Leopold Strasse, where the Schwabing district ends and the University district begins. It also happens to be right across from the "Mensa", the student cafeteria.Advanced German Review I
This course is a continuation of the prepatory language classes in the presemester. Weekly short essays and tests evaluate students’ progress. The course focuses on grammar review and vocabulary acquisition.

Culture and Civilization
This course has two main focal points: the reunification of Germany and its consequences, and the political, social and cultural structure of the old and new Federal Republic of Germany. This knowledge will help students adjust to and understand their surroundings during their year in Munich. Students visit schools and various political, cultural, and social institutions, as well as media organizations and conduct interviews with representatives from the institutions and organizations. 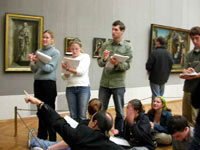 Students explore the masterpieces in the Alte Pinakothek.Art through the Ages I
This course highlights the uniqueness of German art within the context of European art history from the 8th to the 20th century. Significant art historical periods, such as Romanesque, Gothic, Renaissance, Baroque, Classicism, Impressionism, and Expressionism, are introduced using examples from architecture, sculpture and painting. Taking advantage of its location in Munich, this course has no classroom: all class meetings take place in local museums and buildings.

Poetic Diction
In this course, students explore the poetry of major German writers, from Goethe and Schiller to the present. The course moves from simple poems and ballads to more complex works such as Rilke’s Elegies. Students learn about basic poetic concepts such as meter, rhyme, and rhythm, and also memorize and perform poems.

Contemporary Literature: 1990-2012
Students are presented with texts that deal with current political and social problems and other topics relevant to contemporary Germany. Selections from the reading list include well-known authors like Günter Grass (Nobel Prize winner for literature in 2000), as well as accomplished works from younger authors. The typical forms of contemporary literature are analyzed and group discussions approach these texts from every aspect, including technique, genre and literary theory.

Nationalism and German Identity
This course examines how poets have reacted to the dichotomy between nationalism and cosmopolitanism that has characterized German history over the past two hundred years. Students look at texts by Goethe, Kleist, Büchner, Heine, Fontane, Thomas Mann, Heinrich Mann, Horvath, Brecht, Tucholsky, and Andersch, which speak to the issue of identity and critical self-evaluation. Excursions to various sites in Munich are part of the course.

Munich through Artists’ Eyes
The course takes students on walks through the Schwabing district of Munich to visit the homes of writers who lived there from the turn of the century to World War II. In the class, the satirical newspaper “Simplicissimus” is compared to the political poetry of Frank Wedekind. The “cosmic” poet, Stefan George, with his elite manifesto and prefascist tendencies, is examined critically by Franziska Graefin zu Reventlow. The writings of painters Wassily Kandinsky and Franz Marc are discussed in the context of the Munich revolutions of 1918. Thomas Mann wrote the Buddenbrooks in Schwabing, and his brother Heinrich wrote The Subject there. Revolutionary writers living in Schwabing, such as Ernst Toller and Erich Muehsam, influenced the works of Bertold Brecht and Oedoen von Horvath.

Escape to Life or From Bavaria to America
Starting in 1900, Munich and its “Kuenstlerviertel” Schwabing have been known as the stage for important developments of the artistic and literary “Moderne”. Political development after 1933 forced many writers into American exile where they fought Nazi Germany in their writing. The course will discuss the interrelation between Germany and America by examining those writers who lived in Munich and fled to the United States and Mexico. In addition, we will take literary walks in order to visit those places in Munich where the writers lived, viewing Munich through the eyes of people who had to give up their homes in order to survive and to maintain their integrity.

Year of Study in Munich