Oishi knew she wanted to study international affairs when she arrived at Lewis & Clark, and that she 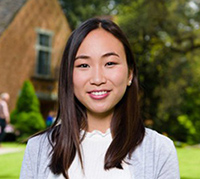 wanted to eventually do something meaningful. She attributes an international human rights law class she took with Smith-Cannoy with confirming her passion for international law and policy.

Oishi’s interest in international human rights law led her to write her senior honors thesis on the case of Uganda’s self-referral to the International Criminal Court (ICC), which is the highest court in the world for abuses like war crimes and crimes against humanity.

“And because I received the Barbara Hirschi Neely Scholarship, I got to use my stipend to actually visit [the Netherlands], go to the ICC in The Hague, and watch the trials as part of my research,” Oishi explained. “It was an amazing experience to write my thesis and see how it applied to real life. As I take my next steps, that experience at the ICC and getting to watch those lawyers at work has been serving as a motivator for me as a place where I’d love to work one day.”

Oishi plans on going to law school in one or two years, “something [Senior Lecturer] Cyrus Partovi long pushed me to do,” she added. In the meantime, Oishi has already moved to Boston where she’ll be working at a nonprofit focused on national consumer healthcare advocacy. 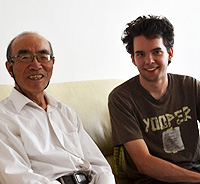 I first started studying Chinese as an exchange student to Kaohsiung, Taiwan. The love of the language I developed in Taiwan played an integral role in deciding to go to Lewis & Clark college. I knew I wanted to not only continue my Chinese studies in college but that I wanted the opportunity to do so abroad. Second semester junior year I spent in Beijing, China at the CET intensive language program. With the time in Beijing not spent studying I explored the developing underground music scene. Upon finishing my semester in Beijing I had the unique opportunity to go collect and translate oral histories in Qinghai, China.
I hope to continue using my Chinese skills in whatever future career I might hold. 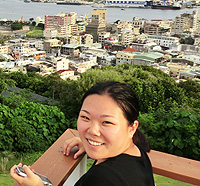 I arrived at L&C hoping to major in chemistry, but the engaging courses related to various issues surrounding modern-day China – development, class, gender, among many others – piqued my interest. During my time at L&C, I took as many China-related courses as possible, worked hard to improve my Chinese, and was lucky enough to spend a semester abroad in Beijing.

After graduation, I spent two months working with Professor Dede in Qinghai Province, China. We focused on Chinese-to-English translation of a regional author’s short stories. During that trip, I discovered my passion for literature and cemented my interest in cross-cultural studies.

My experience at L&C has helped me build a strong foundation for my graduate studies, focusing on contemporary Tibetan Sinophone literature at U.C. Berkeley. 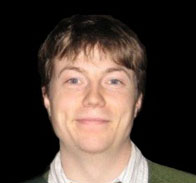 Having studied Spanish in high school, I decided I was ready for something different and more challenging in college. So I took Beginning Chinese. It wasn’t long after our first exercise counting steps aloud in Chinese while ascending a stairway that I became enthralled by the language. I ended up taking nearly every Chinese language course offered. I studied in the famously beautiful city of Guilin during the fall of 2001 and returned to China in 2003 on a research grant to study private schools. Both trips were highlights of my college experience and made possible by my language study. Graduating from a liberal arts college with such a rare and tangible skill has opened many doors. I am now a law student at New York University. Living in the area with the largest Chinese population in the United States, I frequently call upon my Chinese skills to do everything from order dishes not on the menu to counsel immigrants in need of help. I hope to integrate my knowledge of Chinese into my law practice, which shouldn’t be hard; whether my practice focuses on human rights, the environment, the corporate world, or immigration (to name just a few possibilities), my Chinese language skills will serve me well. 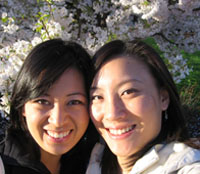 I studied Chinese language for three years at Lewis and Clark and spent a semester abroad in Beijing in a language intensive program at CET. In addition, I also took a Chinese literature class and graduated with a minor in Chinese. All of the classes were very well taught at a challenging but manageable pace. Transitioning from second year level to third year was a big leap. The vocabulary and curriculum was markedly more demanding than my two previous years. Studying abroad in China was the my most memorable learning experience in college, and I am glad I was able to immerse myself in a culture that is quite distinct from America. Currently I am attending medical school at Temple University in Pennsylvania, and I am anxiouslly awaiting the day I can return to China! 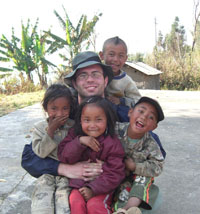 Starting graduate school at University of Washington in fall 2007. Interested in dialects of NE China and language contact with Yanbian Korean minority.

After L&C graduation spent a year in South Korea on a Fulbright teaching grant. Currently occupied with co-writing a non-academic travelogue about the borderlands of China and the minority people who live there.

The L&C Chinese classes combined with a year studying abroad in Beijing made for a rigorous and rewarding undergraduate experience. The small group of professors provide the type of tailored personal attention that one can expect from a small college like L&C. Three years of study with Professor Dede and Dr. Liu have prepared me to further pursue my academic interests in Chinese language at the graduate level.

Now back in the United States, Jacob has given presentations on China’s ethnic minorities and the Korean minority in Japan. He is working toward a master’s degree in Chinese and Korean linguistics at the University of Washington.