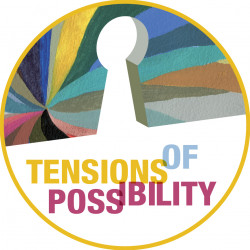 All symposium lectures, workshops, performances, and panel discussions are free and open to the public.

No registration is required. Please note that this schedule is subject to change.

Visions of Suffrage: Approaches to Women’s Suffrage in Oregon, 1890-1920
In commemoration of the 100th anniversary of suffrage, this exhibit looks back at the history of Oregon, where women secured the vote in 1912. Located on the top floor of Watzek, “Visions of Suffrage” examines the efforts of three different women, each vital to the fight for suffrage in Oregon: Abigail Scott Duniway, Esther Pohl Lovejoy, and Harriet “Hattie” Redmond. Through documents and photographs of and about these women, the exhibit demonstrates the diversity of tactics, philosophies, and organizations that ultimately made Oregon one of the first states with universal suffrage.

Curated by L&C students Bryan Miller ’20 and Ben Warner ’22.
This exhibit will remain on display on the top floor of Watzek Library through the end of the spring semester.

After All: On Dereliction and Destitution

“For so long we have proposed considering the politics of this or the politics of that – the politics of transgender, the politics of sex, the politics of performance, the politics of resistance – what if politics itself, as a concept and a framework is not the solution but the problem. In other words, what if this need to legitimate everything via the political as we currently understand politics (activities associated with governance) is part of the problem in that it leads to certain kinds of projects and it disallows others – the propulsive projects that engage making, doing, being, building, becoming, knowing, declaring, proposing, dealing, moving and so on. The version of the political which I have just outlined comes complete with its own model of time and temporality: we are committed, within the logic of “just do it,” to a version of the future that breaks with the past completely, moves in a determined fashion in a forward direction and already knows what kind of future awaits. This is the version of a temporal politics that new work I am doing on queer utopian projects from the 1970’s breaks with, offering instead to go back in order to find alternative futures nested in past dreams. The projects I will survey today from a queer, pre-digital, punk world of 1970’s New York City, thrive in a critical utopian space that demands not simply a new world, but a complete and utter dismantling of this world, the here and now. For this reason, using concepts like “dereliction” and “destitution,” I will think about a temporality that resists making, being, doing and invests instead in unmaking, unbuilding and divesting. If capitalism demands acquisition and amplification, the anarchitectural projects surveyed here offer minimalist structures, collapse, nothing and dis-appearance.”

Please click here to view the video of the keynote presentation by Jack Halberstam, After All: On Dereliction and Destitution

1:45–3:15 p.m., Council Chamber
On Screen: Representations of Gender and Sexuality
Moderator: Rishona Zimring, L&C professor of English
Sage Walters, L&C ’18, “Freaks: Disabled Bodies in Horror Media”
Sami Sloan, University of Puget Sound ’20, “‘Not only for love, not only for money, but for the queer community’: MTV’s Are You The One and the Politics of Queer Representation on Reality Television” (This presenter has withdrawn from the symposium.)
Io Blanchett, Reed College ’20, “Filmic Feminisms: Confronting Essentialism in Varda’s Vagabond”

1:45–3:15 p.m., Thayer
Workshop: Intimacy as a Path of LGBTQ Liberation
Facilitated by Keely C. Helmick, L&C GSEC ’07 and licensed professional counselor, and Paige Matthews, licensed professional counselor intern
This workshop imagines ways for queer and trans folks to use their relationships not only as a place for healing but as a tool for personal and collective liberation.

Radical Disruptors: What We Can Learn From Queer Women of Color

Please click here to view the video the keynote presentation by Feminista Jones, Radical Disruptors: What We Can Learn From Queer Women of Color

* Tickets are required for this event. Symposium participants are eligible for free tickets to the performance on Friday, March 13. Obtain free tickets here with code GSS20.


Marie Antoinette by David Adjmi is a riotous and sharply written play about the monstrous things people do in gilded cages. The play employs historical fact as well as the cultural mythology of Marie Antoinette to paint the portrait of a woman who is both elevated and held captive by her gender, circumstance and historic moment. The play re-imagines the possibilities present for the Queen of France as she navigates her personal pleasure, her family’s peril and her larger political and social responsibilities. The Lewis & Clark Theatre Department production will draw out resonances with our current time, highlighting our complicity in perpetuating a culture that puts celebrities, and women in particular, onto pedestals defined by beauty, fashion and sexuality. The production will also explore the rumblings of revolution that are just underneath the surface of our attempt to be picture perfect, and the violent repercussions of ignoring the suffering of many for the pleasure and comfort of a few.