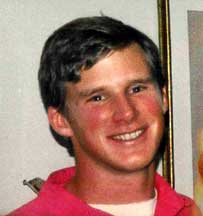 Kent Philip Swanson Jr., a 1995 graduate of Lewis & Clark, died in a helicopter crash in 1997. In his memory, Kent’s family established a scholarship to celebrate their son’s exuberance and enthusiasm for the Biological Sciences, the arts, the out-of doors, and life in general. The scholarship is intended to benefit students majoring in Biology who have demonstrated similar goals and personal qualities to those of Kent and is awarded annually to a student completing their sophomore year. The scholarship award spans a two year period, covering the student’s junior and senior years at Lewis and Clark. A similar scholarship is also awarded through the Art Department.

Kent Swanson Jr. enrolled at Lewis and Clark in the fall of 1990. He had a true love of and curiosity about biology, and enjoyed asking questions and seeking answers to difficult scientific problems. He also had a passion and sincere concern for the environment, loved nature, and spent as much time out-of-doors as possible. He was an avid mountain climber, backpacker, cross-country skier, and served as a volunteer for Portland Mountain Rescue. While his biological interests were varied, he particularly enjoyed courses in Ecology and Field Biology. In addition Kent loved to express his artistic talents and developed considerable skills as a ceramist. He enjoyed incorporating various aspects of biology into his pottery. After graduating from the college with a degree in biology Kent subsequently worked as a mountain climbing guide in the North Cascades and a ski patrolmen at Mammoth Lakes in California. While participating in an avalanche training program sponsored by the Canadian Avalanche Association in January of 1997, Kent met with a tragic and untimely death as a result of a helicopter crash.

The scholarship to honor Kent Jr’s memory is the first such scholarship for a Biology Major in the history of the college. In keeping with the family’s wishes, selection is based on the following criteria:

Each spring the department solicits applications from eligible students and the award is announced at Honor’s Convocation.