The Phi Beta Kappa Society has granted to the Phi Beta Kappa members of the Lewis & Clark College faculty and staff, a chapter of the Society designated as Gamma (Γ) of Oregon. Gamma is the third letter of the Greek alphabet which indicates that we are the third college in Oregon to receive a chapter of ΦΒΚ. The University of Oregon is Alpha of Oregon, Reed College is Beta of Oregon, Willamette University shelters the Delta chapter and the newest, Oregon State University is Epsilon of Oregon.
Each year, graduating seniors and a smaller number of juniors with excellent academic records, are selected for membership in this, the oldest and most prestigious academic honor society in the United States.

The President and Vice President are elected annually. The Secretary-Treasurer is elected for a three-year term.

“You are here because you’ve made a habit of excellence. Occasional brilliance will not get you into Phi Beta Kappa. You are not one-subject wonders. You’ve established your intellectual credentials in a wide range of subjects. The excellence that brings you here is not accidental. You have chosen to pursue it, and you have earned it. You’ve broken the code of how to get it done. And that stays with you for life.”

The ideal Phi Beta Kappa candidate has demonstrated intellectual integrity, tolerance for other views, and a broad range of academic interests. The Phi Beta Kappa Society recognizes three types of member: members-in-course, alumni members, and honorary members. Membership in the Society is for life.

Members-in-course are elected on the basis of their academic records as undergraduates. To be eligible for election, students must have pursued a broad program of study in the liberal arts and sciences. Typically, no more that 10 percent of the candidates for degrees in liberal arts and sciences are elected. Each year, about one college senior in a hundred, nationwide, is invited to join Phi Beta Kappa.

Alumni members are elected from among alumni of the College who graduated at least 10 years earlier and merit recognition for scholarly accomplishment after graduation. Honorary members, chosen on the same basis as alumni members, did not attend Lewis & Clark 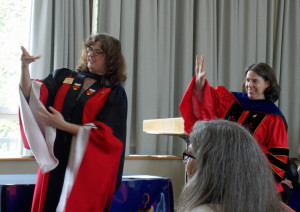 At soon as the fall semester grades are recorded, a committee of faculty [the three officers and four other members elected by our chapter] meets to scrutinize carefully and thoroughly, transcripts of students who fulfill the GPA and residence criteria stipulated in our Constitution (Article III, Section 2) and Bylaws (Article III). The transcripts of all eligible students are examined and considered. Because there are limits in our constitution on how many students we can elect, not all eligible students can be nominated. The selection committee, formally known as the Committee on Members-in-Course, assembles a list of graduating seniors and a much smaller list of juniors (defined as students who entered L&C as first year students and have been here for 5 semesters) who best exemplify the ideals [scholarly ability, broad interests and good character] of the Society, and presents it to the active members of the chapter for their approval.

Those students elected will be notified in April and initiated in a traditional ceremony in May during commencement weekend.

Advice for students interested in being elected to Phi Beta Kappa

In general, the selection committee looks to see whether an eligible student has explored the liberal arts and taken challenging courses. Eligibility criteria are described in our Constitution and Bylaws. The selection committee examines every transcript in detail to see whether the student has take courses in all three of the academic divisions of the College: Arts and Humanities, Social Sciences, and Mathematical and Natural Sciences.

Students are well advised to choose their elective courses broadly, that is, outside the major department and closely related departments in the same division as the major. Since the College does not specifically require any courses in the social sciences, a student seeking election to membership should take courses in the social sciences. Furthermore, students seeking election to membership should take more than the required number of courses in the Arts and Humanities division and the Mathematical and Natural Sciences division. In 2011 new stipulations for membership were adopted by the Chapters of Phi Beta Kappa. These stipulations began with the class of 2015. Included in these is a stipulation on mathematics, considered to be foundational in the construction of logical argument. Courses at Lewis and Clark that meet this stipulation are Math 103, any mathematics course numbered 131 or above, and Phil 101.

The College motto—Explorare, Discere, Sociare— means “to explore, to learn, to work together.” The members of the Lewis & Clark College chapter of Phi Beta Kappa encourage all students to explore the considerable breadth of our curriculum, to discover the beauty and satisfaction of learning for learning’s sake, and to work together with other students and faculty to obtain the most out of their educational experience at Lewis & Clark.

Ordering Keys and Other ΦΒΚ items

Members wishing to obtain a key may log on to the website of Hand & Hammer, a company which is the official supplier of Phi Beta Kappa keys and other paraphernalia. The paraphernalia includes a variety of keys from the traditional to earrings, tie pins and rings as well as a necktie. The company will only fill orders after checking to see whether the orderer is an actual member of the Society. 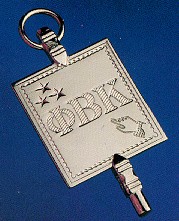 Generally, it takes the Society several weeks to process new memberships after they have received the registration cards submitted by our chapter. New members should be listed on the Society records by the end of June.